The outsider artist has become a fixture of the postmodern age. There are exhibitions, books, symposia and museums documenting artists who create outside the accepted norms of “fine art.” The French artist Jean Dubuffet along with Andre Breton first defined outsider art as Art Brut (Raw Art) in 1945 and collected examples of work they considered “uncooked” by either classical or contemporary cultural influences.

Individuals on the fringes of society, the insane, disturbed or simply eccentrics driven by their unique needs and personalities produced Art Brut. Their eclectic use of unorthodox materials and subjects often led to puzzling and impenetrable images. In 1975, Dubuffet donated his enormous collection to the Collection de l’Art Brut in Lausanne, Switzerland. Over the years, the increased exposure of Art Brut and other outsider art has had a definitive influence on mainstream art, nurturing the post-modernist culture of disjunction and dislocation. At the Andrew Edlin Gallery, Remembrance and Ritual: Jewish Folk Artists of our Time presents what may be one of the fundamental forms of outsider art, Jewish Folk Art.

Edlin defines these eight artists: Paul Edlin (his uncle), Aaron Birnbaum, Bernard Goodman, Etta Ehrlich, Paul Graubard, Malcah Zeldis, Rudy Rotter and Albert Hoffman as “outsiders” and rightly so. Traditional folk artists work within an established cultural tradition of craft and folk custom. Each of these artists is outside any recognizable tradition, Jewish or Gentile, creating their artwork frequently in isolation, marching very much to a tune of their own choosing. Here, the unifying distinction is that they are all Jews. Interestingly enough, many of them have decided to create their art using overt Jewish subjects that defines them conclusively as outsiders in the context of mainstream contemporary art.

Rudy Rotter’s (1913-2001) wood relief sculptures in mahogany have a massive strength that reflects the elemental subjects he has chosen: Moses, Adam and Eve, and Isaac Blessing Jacob- Rebecca. Rotter was a Wisconsin dentist and self- taught artist who sculpted in wood until arthritis forced him to retire in his eighties. His works, spanning a 40-year period, are created with a singular vision of Jewish subjects. Shema (1982) conflates two powerful images
to create a contemporary affirmation of Jewish faith. In a stark frontal image, a man in street clothes holds a small sefer Torah aloft. In this position, he simultaneously becomes the central branch of the synagogue menorah behind him and echoes the classic pose of Moses holding up the original two tablets. In this way Moses is seen here as a mid-Western Everyman.

Using a completely different approach, Malcha Zeldis presents Job (1999) as the metaphorical center of the universe. His enormous head surrounded by a blue-white beard halo pleads for understanding. Kneeling in an idyllic green landscape populated by his dead children, flocks of dead sheep and an especially awesome devil with red wings, Job is comforted and counseled by his wife and his erstwhile friends. Nothing is able to console him as he reaches up to a distant G-d. Job is in some ways the quintessential outsider, because he
is neither satisfied by G-d’s answers to his questions nor comforted by friends or spouse. He is the man alone struggling with meaning in a lonely universe.

The artist who effectively steals the show is Albert Hoffman. He is represented by seven mahogany sculptures and three mixed media paintings that distinguish him as a totally original artist capable of a wide range of riveting images. Ten Commandments (1971) is a normative image of Moses holding up the two tablets, one foot poised forward and the other braced to the side. The deep red mahogany combines with the squat forms of the figure to give this forty-one inch figure an fearsome authority, making us uncertain whether Moses is displaying the luchos for us or about to violently cast them down at our feet.

Tabernacle (1974) is a diminutive synagogue environment that alludes to the entranceway into the Second Temple. The scale, imaginative lions and tablets, symbols of the tribes, and massive but detailed woodworking elevate the sculpture into an elegant and transcendent testimony that each and every synagogue is a miniature Holy Temple.

The most mysterious of the works is a painted mahogany relief sculpture, Thirteen Men (1975). A solitary figure stands at the amud, leading the minyan in prayer. The men are arranged on the extreme edges of the panel. Two sifre Torah, rampant lions and menorahs become inadvertent members of this little congregation. Superficially, the sculpture is a simple depiction of a synagogue service while lurking beneath the surface are troubling questions that defy logical answers. What is the meaning of the “Thirteen Men?” Why are the pews empty and the men so distant from the ark and the Torahs? What is really going on here?

Each of these works and many others in this exhibition raise unorthodox questions from Jewish artists who find themselves on the fringes of the art world, not to mention the surrounding non-Jewish society. They have come in from the edges to present us with their unsettling visions. For our own good, we had best pay close attention to this Jewish Outsider Art.

Richard McBee is a painter of Torah subject matter and writer on Jewish Art. Please feel free to e-mail him with comments at rmcbee@nyc.rr.com.
Advertisement 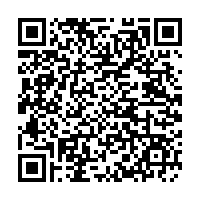