New York City Police have arrested a man in connection with the vicious beating of a rabbi in Lincoln Terrace Park, in the Crown Heights section of Brooklyn on August 27.


The suspect, 26-year-old Oniel G. Gilbourne, was taken into custody this past Thursday (Sept. 12) and charged with assault as a hate crime and criminal possession of a weapon.

Gilbourne is accused of beating 63-year-old Rabbi Abraham Gopin in the face with a large paving stone, while the rabbi was out for a morning walk at around 7:30 am. The attacker allegedly punched the rabbi several times in the head and then hit him with the paving stone.

The rabbi, a father of 10 and grandfather as well, lost two front teeth and suffered a broken nose, plus multiple lacerations to his face, police said.

The rabbi told local reporters that he believed the attacker wanted to kill him, saying, “The way he jumped toward me, he was determined to kill. No question.” He added that he used the phrase, “dirty Jews,” during his attack.

The NYPD Hate Crimes Unit is investigating the attack as a hate crime, PIX-11 and other media outlets reported.

According to NYPD statistics there have been at least 146 anti-Semitic hate crime complaints so far this year in New York City – up from 88 over the same period last year. 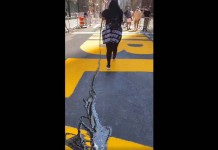