Shavuos marks the day that Hashem gave us the Torah and charged us with being a “holy nation,” a “kingdom of priests,” or – as we are described in the Book of Prophets – a “light unto the nations.”

What exactly does being a light unto the nations entail and can this task be fulfilled outside Israel? We posed this question to five rabbis in Israel.

The Jews of America or France – where I grew up – don’t strive to be a “light to the nations.” They strive to be loyal Americans and Frenchmen without drawing undo attention to themselves.

The Jewish people illuminated the darkness of nations that adhere to immoral cultures and false religions; we benefited society wherever we lived. But our ability to light up the darkness was ultimately limited.

According to Rav Kook and others, being a “light to the nations” means establishing a Jewish state as the vessel for the appearance of the Kingdom of Hashem in the world.

Nonetheless, we have to be honest and say that although Hashem has given us the State of Israel, we are not yet a light unto the nations. First we have to be a light to ourselves. There is too much corruption in the country. Too much greed. We have adopted too many alien ideologies and cultural norms, imported from non-Jewish nations.

This was an unavoidable consequence of aliyah from all over the world and from our desire to become a lead player in the “global village.” Building a nation faithful to Torah is not an easy undertaking. We still have much work to do, and a great deal of Jewish education is needed.

We have improved in many ways. The galut was a good training ground for humbling our haughty natures – the basis for the senseless hatred that destroyed our kingdom and brought about our exile from our land. Today, there is a lot of name calling during election campaigns in Israel, but we don’t chop off each other’s heads like we did in the violent Jewish wars of old. We are improving, but we still have a long way to go.

The only place on the globe that a Jew can be a light unto the nations is in Eretz Yisrael. The prophet Isaiah makes this clear in chapter 42, regarding the ingathering of the exiles and the prowess of Am Yisrael in its land.

To our chagrin, the situation of the Jews in the Diaspora over the last 150 years is one in which Jews are scorned and persecuted, or else they abandon or play down their Jewish identity in order to blend in with non-Jews.

In the previous century, hundreds of thousands of Jews abandoned their faith out of weakness and a sycophantic compulsion to be accepted by the non-Jew. Likewise in our generation, myriads of Jews are assimilating from the same lack of spirit and obsession with groveling.

One cannot rightly call a community a “light to the nations” when more than half of it is assimilating. It isn’t a light even unto itself. It is ashamed of its own identity, and a person who is untrue to himself cannot be a guide for others. Gentiles look down on Jews for trying to fit in with the society around them.

If a Jew wants to be a light unto the nations, let him follow the instructions of Hashem and heed His command to Avraham, “Lech lecha,” by moving to the Land of Israel. Precisely there, in Eretz Yisrael, Hashem promised that Avraham’s offspring would become a great nation and a blessing to all of mankind:

“Go forth from your country, and from your family, and from your father’s house, to the Land which I will show you. And I will make you into a great nation, and I will bless you, and make your name great; and so you shall be a blessing. … And in you all the families of the earth will be blessed.”

This glorious destiny can only come about in Eretz Yisrael. It was true then, and it is true today.

How can being a “light unto the nations” apply today in the Diaspora when there is a 70-80 percent rate of assimilation in the United States and Europe?

I dare say that the light we have provided to the non-Jews was produced by the thousands of fires they started in order to burn our holy books, our homes, and our bodies. The last light came from the crematoria in the death camps in Europe.

A light is a necessary entity when it’s appreciated, but the non-Jews were not interested in light that shines from the flame of moral conscience. It is no coincidence that the color red of Esav – the color of fire and blood – appears in the national flags of almost every country in Europe.

The sun produces light and heat for us. But the sun is not close to us; rather, it’s millions of kilometers away. It takes eight minutes for the light we see now to arrive from the sun at the speed of 300,000 kilometers per second. So too, we have to be a light, first to ourselves, then to the non-Jews, while always remaining far, far away from them, just as the sun is far away from the earth.

The most awful chillul Hashem that ever occurred took place with the wholesale slaughter of 6,000,000 Jews, Hashem’s children, His chosen nation, during the Holocaust in Europe, when even Allied forces cooperated with Hitler, may he and his memory be erased, by not enabling Jews to come to Eretz Yisrael and by not allowing shiploads of Jewish refugees to enter their countries.

Then Hashem, the G-d of Israel, decided that He would not allow His holy name – which is intrinsically bound in an everlasting bond with His nation Israel – to be desecrated again. So He founded the State of Israel via the selfless bravery and back-breaking labor of Jewish pioneers, whose prodigious deeds transformed a devastated and downtrodden people into a dazzling international leader, which is the greatest beacon of light there is in the world today, even before we have reached the level of national teshuvah to the ways of our holy Torah.

Medinat Yisrael is helping humankind everywhere as an innovator and pacesetter in all fields, precisely from the Land of Israel – not outside of it. It is a beacon of light which is destined to glow brighter and brighter until it lights up the darkness of the moral and spiritual corruption surrounding mankind.

The tiny lights of Jews and Jewish communities scattered around the globe flicker and fade – a passing footnote in Jewish history – while the light of Am Yisrael in Eretz Yisrael blazes forth from Zion in an ever-increasing flame until the very end of time.

Ezekiel, in his prophecy of the Valley of Dry Bones, declares that exile and Jewish life in gentile lands is a desecration of G-d’s name. The reason, as Rashi explains, is simple: Statelessness causes the gentiles to look down scornfully on the Jews and at Hashem who seems to lack the power to safeguard His people in their own land. Why look to such a debased people for enlightenment and guidance?

The fact that the Jewish people live as outcasts in alien lands debases G-d, His chosen people, and the Torah.

In galut, our Sages teach, the Torah sits in darkness so that even if the gentiles were interested in hearing what it teaches, it would be in its very truncated, water-down form.

In order to be a light unto the nations, first and foremost, the Jews have be dwell in the Land of Israel in their own Jewish state.

Once there, in the Holy Land, they have to return to a life of Torah in its original fullness, in its national grandeur. Then – and only then – can Am Yisrael fulfill its mission of being a beacon of light to mankind.

Even though Medinat Yisrael is not yet a symbol of a just and moral nation, merely the fact that we have become a successful and prospering country with an abundance of Torah scholarship is in itself a Kiddush Hashem.

Today, the Diaspora is irrelevant. Whatever function it had, it is now obsolete. Furthermore, Jews are endangered there, whether through the ever-increasing rate of assimilation, anti-Semitism, or corona.

Am Yisrael was never meant to remain in galut forever. The time has arrived to come home and to build a bonfire of Torah that will light up the world. 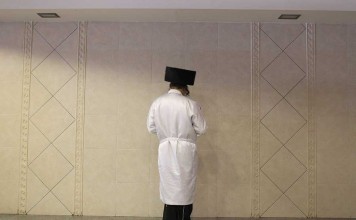