When I started becoming a baal teshuvah, I abandoned my budding career in Hollywood and moved to New York City. I was sitting in a Hebrew ulpan in the building of the Jewish Agency on Park Avenue one day when two Gush Emunim shlichim from Israel, Meir Indor and Rav Yehuda Hazani, appeared and asked for volunteers to help in IDF warehouses during the 1982 Lebanon War.

The next day, I showed up at the emergency campaign headquarters they had set up in The Jewish Press building in Brooklyn. To make a long story short, since I knew a little about public relations, I was asked to become the director of the “Volunteers for Israel” program in America.


While heading that operation, I met Era Rapaport, the American-born mayor of Shilo. One evening, I went to visit Era in Queens and discovered his wife, Orit, crying in the living room. “What’s the matter?” I asked.

“Haven’t you heard?” she sobbed.

“There’s an arrest warrant out for Era in Israel,” she told me. “The Shin Bet thinks he’s part of the Jewish Underground.”

Even before the First Intifada, life was dangerous for settlers of Judea and Samaria as Arabs threw stones and Molotov cocktails and fired at them as if they were ducks in a shooting gallery. When the government did nothing to quell the unrest, a group of passionate settlers decided to take matters into their own hands.

Clandestinely, they planned a series of attacks on key Arab targets, and succeeded in planting a car bomb that blew the legs off the mayor of Shechem, who had vowed to dance on Jewish graves and chase the settlers out of the land. The Shin Bet believed Era was involved in that attack and wanted to arrest him, but he couldn’t be extradited because of his American citizenship.

Era arrived home that evening well past midnight. He held a short letter in his hand from Rabbi Moshe Tendler, whom he has just visited in Monsey, trying to get the respected halachic authority to declare that the actions of the Underground were within the boundaries of Jewish Law. Rabbi Tendler had written a concise haskamah quoting the Jewish law that states: When confronted with a murderer who comes to kill you, a person is allowed to rise up and kill him first.

“Why don’t I write it up into an in-depth article?” I offered.

“Why not?” he agreed. “Tomorrow morning, we can take it to The Jewish Press.”

So I wrote a piece about the letter, adding dramatic background that Era provided, and drove to Brooklyn first thing in the morning. Era also knew the founder of the newspaper, Rabbi Shalom Klass, who was always ready to help Israel. The Torah scholar welcomed us into his office. Era filled him in on the background of the story and suggested that I be assigned to report on it for The Jewish Press. Without hesitation, Rabbi Klass agreed.

“I’m putting Fishman in charge of the front page of the newspaper!” he declared. “As long as the Jewish Underground is in jail, every week I want Fishman to write our lead, front-page story. Their imprisonment is a total injustice. Rabbi Tendler’s letter is front-page news!”

When the meeting was finished, I stopped Era in the corridor.

“Listen Era,” I confessed. “I’d like to help out, but I have an airplane ticket to make aliyah this week.”

“No problem,” the idealist replied without batting an eye. “You go to Israel. That’s more important than anything. You can send in your stories from there. I’ll call Israel today and tell them you’re on the way.”

I left the powerful story about the Underground with the newspaper’s managing editor, Arnold Fine and flew off to Israel a few days later along with a gigantic refrigerator carton that Era had dropped off at my apartment, filled with toys and clothing that a Jewish community in New Jersey had donated for the children of Shilo.

When I arrived in Yerushalayim, I dropped off my bags and the giant box at a friend’s apartment and then headed to the Kotel to thank G-d for the kindness He had bestowed upon me in bringing me home to Israel. 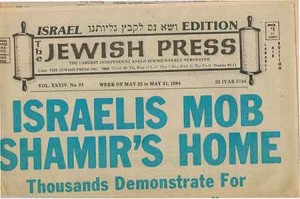 On the way, I passed the house of Prime Minister Yitzhak Shamir, not far from the HaPalmach neighborhood where my friend lived. Across the street, I noticed a group of settlers demonstrating. I asked them what was going on. Amazingly, one of the protestors was holding a copy of that week’s Jewish Press with the front-page article I had written.

“Kenny!” he called out happily, remembering me from the Shabbat I had spent with his family in Hevron. It was Ephraim, son of Rabbi Moshe Levinger who has been arrested for suspected involvement with the Jewish Underground.

“Meet Kenny Fishman,” he exclaimed to his fellow demonstrators, “the Hollywood screenwriter who wrote the article in the newspaper.”

Everyone in the crowd took turns shaking my hand.

“Fantastic!” Ephraim declared. “Hurry to the Russian Compound Prison now! There’s a big demonstration there, demanding the release of my father and all the Jewish Underground prisoners.”

So I hurried downtown and made my way up a small incline to the old, barb-wire-enclosed building that housed the Jerusalem Police Headquarters and the local prison, where Rabbi Levinger was being held captive. Suddenly, Meir Indor ran up to me holding a copy of The Jewish Press in his hand.

“It’s great that you’re here!” he exclaimed, handing me the newspaper. “We’ll squeeze you in between Yosef Mendelevich and Rebbetzin Levinger. Get up on the roof of my car and read the letter as the special messenger of Rabbi Tendler to the demonstration on behalf of the Jewish Underground.”

I gazed toward the place where Indor was pointing. Yosef Mendelevich, the famous Prisoner of Zion who had spent 11 years in Soviet prisons for trying to hijack an airplane to Israel, was speaking into a bullhorn while standing on the roof of Indor’s dilapidated Volkswagon “Beetle.” Behind the large crowd were photographers and TV cameramen from Israel and around the world. Up on the roof of the prison, police photographers stood snapping pictures.

“Gevalt!” I thought to myself. My very first day in Israel, and my mother will turn on the TV in America and see her son making a protest speech against the Israeli government on behalf of the Jewish Underground!

Before I could bolt, Indor introduced me to the crowd, announcing that I had just arrived from America with Rabbi Tendler’s letter giving halachic sanction to the activities of the arrested prisoners. Hands lifted me up to the roof of the car. Holding the bullhorn, I read out the letter in a loud voice. The letter was in English, and I couldn’t tell how much of it the crowd understood, but everyone applauded enthusiastically, crying out, “Free the Machteret! Release the prisoners! Arrest Arab terrorists instead!”

“Uh oh,” I thought to myself. “My mother is going to have a heart attack!” That was my first day in the Holy Land.

Writing a story about the demonstration, I dictated it word-by-word by telephone to The Jewish Press newsroom in Brooklyn. For the next few months, I kept phoning in front-page stories to the newspaper as the trial progressed. I still have copies of them stashed away in a closet. 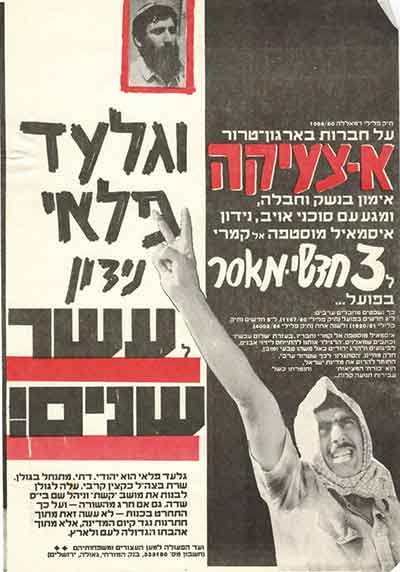 Rabbi Levinger was released from jail, but the other members of the Underground were charged with serious felonies and given long prison sentences. Little did I know that I’d soon be working again with Rabbi Yehuda Hazani of the “Volunteers for Israel” project on a nationwide campaign he initiated to free the Machteret from jail. I had the honor of designing the first campaign poster with him.

Rather than remaining in America where Israel couldn’t touch him, Era Rapaport ultimately flew back home to be with his comrades. The police were waiting for him at Ben Gurion Airport when he stepped off the plane.

“Why did you come back to Israel?” a reporter asked him.

“As a Jew, I’d rather sit in a prison in Israel than be a free man in America!” Era answered.

That summer, I spent nights on a barren hilltop which was to become the settlement of Eli. Along with students from the Shilo Hesder Yeshiva, I passed the nights trying to comprehend their Hebrew in an ulpan under the stars.

To pass the hours until dawn, I would tell them stories about Hollywood, and they would teach me Torah. When the month of Elul arrived, I registered as a student in the Machon Meir Yeshiva in Jerusalem. On Shabbat and during part of the week, I often joined the group of students who set up an outpost on a hilltop that was to develop into the city of Beitar Illit.

After marrying, my wife and I moved to Bet-El and later to Shilo, where we spent many Shabbatot on another empty mountaintop which became the yishuv of Givat Harel.

Today, I am an over-the-hill-top settler living in what Baruch Marzel calls “the ghetto of Kiryat Moshe” – a city-dweller in the comfortable dati-leumi neighborhood near the Machon Meir and Mercaz HaRav yeshivot.

While my body is ensconced in the Holy City, my heart is still on the windswept hillsides of Judea and Samaria. And wonder of wonders, 35 years later, I am once again writing for The Jewish Press.