Most of us have heard, or should have, of the adventures of Hillel the Elder on a roof on a snowy night.  As recorded in Yoma 35b

Hillel the Elder every day he used to work and earn one tropaic, half of which he would give to the watchman at the house of study; the other half he used on food for himself and the members of his household. One day he was unable to earn anything, so the watchman at the house of study did not let him in. He then climbed [to the roof] and hung on, sitting over the opening of the skylight, so that he could hear the words of the living God from the mouths of Shemaiah and Avtalion. It is said that the was a Sabbath eve in the winter solstice, and snow came down on him from heaven. When the dawn rose, Shemaiah said to Avtalion, “Brother Avtalion, every day this house is bright with light, but today it is dark. Is the day cloudy?” When they looked up, they saw the figure of a man in the skylight. They climbed to the roof and found Hillel, covered with three cubits of snow. They removed the snow from him, bathed and anointed him, and, as they seated him in front of an open fire, they said, “This man deserves to have the Sabbath profaned on his behalf.”…

Hillel of Princeton seems to be stuck up on a roof.

The bare facts about the Hotovely-Princeton Hillel Affair are known.

Protests from a dovish Jewish campus group, the Alliance of Jewish Progressives (AJP) caused the Hillel of Princeton University to cancel a scheduled talk by Deputy Foreign Minister Tzipi Hotovely that was to take place this past Monday evening at the last moment. Chabad picked up the talk.

The protest went public in a letter published in the campus daily. Afterwards, AJP claimed they were only upset that proper procedures for inviting guests to events of the Center for Jewish Living were not followed through on,but were quite forthright that

We firmly reject the CJL’s choice to host a racist speaker like Hotovely while it continues to quiet progressive voices.

While Deputy Minister Michael Oren demanded a boycott, I tweeted him

No, more should come until the Hillel staff there is removed

You write:
“Hotovely’s alarming vision for the future of the region is coupled with a complete rejection of Palestinian history and connection to key sites such as the Haram al-Sharif [Temple Mount].”But it is the Muslims, from the Mufti to Arafat to Abbas who reject any Jewish claim to or identity with Mount Moriah, the First and Second Temples, the attempt to build a Third Temple in 363 CE or anything Jewish about Jerusalem. Have the signees ever studied anything about Jewish history…Do they possess knowledge or slogans? Outlook or out-of-touch? This is all so embarrassing for we Jews who, of whatever political stripe, at least actually know something of what we speak and write.

throwing around a charge of “racism” really gets one no where when, on the record, the most racist element in the conflict are Arabs who wish to deny a ethnic national community any political, civil and human rights the international community recognized and guaranteed consistently since 1917

A late-burner was the AJP post-event claim that they were misunderstood:

MK Hotovely clearly misunderstands the intricacies of the Princeton Jewish community and the aims of our protest. Our Hillel’s response to the concerns of progressive Jewish students does not constitute a “liberal dictatorship.” Rather, the events of the past two days show the CJL’s commitment to more equitable standards of inclusivity and diversity.

But they weren’t. They clearly sought to shut her down,

and succeeded, while claiming all they wanted was for the rules for inviting speakers, the “Israel policy”, by applied equally.

Be that as it may, what raised eyebrows even more was AJP’s claim that a Jewish Agency shaliah was somehow involved. They published

On the evening of Nov. 5, in an email to students and members of the community who planned to attend an address by Tzipi Hotovely, a member of Israel’s Knesset, Rabbi Julie Roth, the executive director of the Center for Jewish Life, and the CJL Israel Fellow, Lior Sharir, announced they would be postponing Hotovely’s visit to the CJL pending further review by the Israel Advisory Committee.

I should trust him as he is, after all, Director of Public Affairs and Communications at The Jewish Agency for Israel. I did ask him if he would call out AJP as liars. I am still waiting.

What is even more intriguing than an Israeli-funded shaliah quashing a government minister’s right to free speech is the role of Rabbi Roth. Could she not have simply picked up a phone and within 5-10 minutes received a confirmation that Ms. Hotovely’s right to appear at Hillel is approved? Did she really think Hotovely is a racist and her arrival should be stymied by rules?

Rabbi Roth is active in the New Israel Fund.

She’s #163 on this petition and #1868 on this one. She has full free speech. Even progressive free speech. And she has unique insight into other radical groups as her husband is Rabbi Justus Baird who has written:

That is, I should stress, a legitimate opinion. It is also radical and skewed, but that’s my opinion. The Diaspora, I think, does not deserve, in Judaism, equality to Israel.

He’s with Rabbis Without Borders. They, at least, hold to the principle that a Rabbi should “strive[s] to be aware of the partial truth in a view with which we deeply disagree”. He is on the Rabbis & Cantors Board of J Street. He identifies with T’ruah and he and his wife have donated a sum of between $1,00-$2,499 to the group.

T’ruah promotes positions – and I don’t know if one would term them mainstream, radical, progressive or extreme – that include that they

advocate for an end to the military occupation of the West Bank and an end to the continued expansion of the settlements that extend this occupation, that infringe on the human rights of Palestinians, and that compromise the safety and security of Israelis…We urge all members of the North American Jewish community to engage in debate and disagreement for the sake of greater truth, justice, and peace.

That sounds to me a little like…Tzipi Hotovely and her predicament which someone termed an example of moral panic by left-wingers.

And at T’ruah they

are concerned about efforts to shut out a growing segment of our community based on their support for the Boycott, Divestment, and Sanctions movement. Despite our disagreements with this movement, we believe that the Jewish community is strengthened by vigorous debate on issues that are vital to the well-being of Israel and the worldwide Jewish community.

He was a supporter of Linda Sarsour as published here at TOI:

“Anyone who has worked closely with Linda knows that she has a deep love for and appreciation for Judaism and Jews,” he said. “Linda and I don’t agree on everything about Israel, Palestine or about other issues, and that is OK with me. I fully support CUNY giving a pubic platform to Linda Sarsour, and I think its graduates have a lot to learn from her voice.”

Hillel has apologized. But I still cannot figure out Rabbi Roth’s role in all this. Was she too busy?

Why didn’t she convene the committee to obtain approval prior to the protest? Why couldn’t she do that in a quick round of phone calls after the AJP protest? She is signed on the ‘apology’ that notes Hotovely’s appearance cancellation was done

because it had not been reviewed by the Center for Jewish Life’s Israel Advisory Committee, which is designed to review and facilitate a broad range of Israel programming throughout the year…This was not a good enough reason to postpone the event… we should have engaged a broader range of students in this program from the beginning…

I am sorry but that sounds very weak and less plausible each time I read it. Was there any doubt in Roth’s mind that Hotovely should be a welcome guest? Or does she think providing her a platform, perhaps, should be debated? Did she really think she was a racist and that AJP had the power over her to stop the event? Does she agree with her husband that the Diaspora is at a level of offsetting Israel?

Why hasn’t AJP been called out on suggesting Sharir was not involved? Did they lie or what? Why haven’t we heard of an investigation or a review of what occurred? Will Rabbi Roth be censured or found innocent of any possible wrongdoing?

Until Next Year in Jerusalem?

(with thanks to AB) 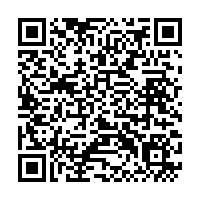