A fisherman once lived near the banks of a river. One evening, exhausted from his labors, he straggled home dreaming of what his life would be like if he were suddenly rich. Suddenly, his foot brushed against a leather pouch filled with small stones that lay on the path. Falling back into his reverie, he picked up the pouch and absent-mindedly began throwing the pebbles into the water.

“When I am rich,” he told himself, “I’ll live in a large house. I’ll have one servant to serve me food and another to serve me wine ”


How detailed his dreams were: A carriage lined with gold! Fine clothes! Goats and sheep! On and on, an image per stone until there was only one stone left. As the fisherman held the final stone in his hand, the last of the sun’s rays caught it and burst into a brilliant rainbow. His eyes widened as he realized that he held in his hand a valuable gem – and that he had been tossing away genuine wealth while dreaming of illusory riches that would never be his.

Each of us is made up of the real and the illusory, the obtainable and the fanciful. We all live with chalomos, dimyonos, illusions, dreams beyond our grasp – yet all the more seductive because we believe they are just that close.

Like the fisherman, we too often sacrifice our genuine wealth in the service of illusory riches. Our ability to see the richness of our lives is skewed. We have infinite confidence in our ability to become successful professionals, business people or technicians, yet we feel utterly incapable when confronted with the richness of becoming knowledgeable talmidei chachamim, pious, religious and ethical Jews.

We live our contrived and imaginary notions without realizing that, in the process, we keep tossing away our most precious gifts.

The world and the heavens above. The attainable and that which is beyond our attainment. The balance between the two is the struggle between natural man and artificial man.

As a result, we are left on the one hand with Jews who deny themselves the joy of a truly meaningful Torah life and, on the other, Jews who remain closed and cloistered in a purely zealous religious framework; with Jews who claim the divine tone of the shofar can only be embellished with trumpets and gold in the Temple and Jews who claim that sounding the shofar is fundamentally irrelevant in a secular, bustling, and pressured world.

So the tension remains, as we forget or ignore that God created us as a physical body – afar min ha’adamah – that incorporates a neshamah and that the two are not intended to be at odds but to mesh as a single entity.

“God formed man out of the dust of the earth and breathed into his nostrils a breath of life.”

Rashi teaches us that man is a duality; he is a productof earthly matter butalsoof heavenly matter. “He is a natural being, living in the animal kingdom,” with his artificial and temporal body, “and he is also a transcendental being, reflecting higher purposes,” governed by a soul. He is subject to laws governing all animal matter; he lives in a material world. But he also partakes of a spiritual dimension, and he feels the call to respond to higher needs and values.

Indeed, it is man’s moral sense and intellect that grant him the free choice to live a mere biological existence or to climb to transcendent heights. Free will is given to man, allowing him to choose to embrace the richness of life or to cast it away.

In enumerating the reasons we sound the shofar on Rosh Hashanah, Saadiah Gaon and other Jewish thinkers cite the Akedah, the sacrifice of Isaac and the substitution of the ram. In the liturgy we supplicate God to recall Isaac’s sacrifice in our favor.

In considering the actual Akedah epi­sode, however, the Torah text is wanting.
“Abraham awoke early in the morning and saddled his donkey. He took his two men with him, along with his son Isaac. He cut wood for the offering and set out, heading for the place that God had designated. On the third day, Abraham looked up, and saw the place from afar.”

Not a word to describe Abraham’s state of mind or emotions. Not a word about his fears or anxieties. Did he not speak with his beloved son along the way? Just, stam, “on the third day.”

The Midrash Tanchuma seeks to fill in many of the blanks.

“And Abraham awoke and went” – the Satan accosted him and appeared to him in the guise of an old man. The latter inquired of him, “Where are you going?”

Asked the Satan, “If a man is going to pray, why the fire and the knife in his hand and the wood on his shoulder?”

Abraham replied, “Perhaps we shall tarry a day or two, slaughter, cook, and eat.”

Said he, “Old man! Was I not there when the Holy One, blessed be He, did say to you, ‘Take your son ?’ Notwithstanding, an old man the likes of you will go and put away a son vouchsafed him at the age of a hundred! You are out of your mind! Gone to slaughter the son given to you at a hundred years!”

Abraham responded, “Just for this.”

The Satan wondered, “And if He tries you more than this, can you withstand it?”

The Satan retorted, “Tomorrow He will tell you, ‘A shedder of blood you are for shedding his blood!’ ”

Abraham answered, “Just for this.”

When Satan saw Abraham was not to be moved, he assumed the form of a large river. Abraham plunged into the waters that reached as far as his knees. He said to his young men, “Follow me.” They plunged in after him. As soon as they reached midway, the waters came up to his neck.

At that moment, Abraham cast his eyes heavenward and said, “Lord of the Universe, You did choose me, and revealed Yourself to me and said to me, ‘I am one and you are one. Through you shall My name become known in My world, so offer up Isaac your son before Me for a burnt-offering.’ I did not hold back, and behold, I am engaged in Your command, but now the waters are endangering life itself. If Isaac or myself drown – who will fulfill Your word? Who will proclaim the unity of Your name?”

Said the Holy One, blessed be He, “By your life! Through you shall the unity of My name be proclaimed in the world.”

The Holy One, blessed be He, forthwith rebuked the spring, the river dried up, and they stood on dry ground.

So it is between natural man and artificial man.

The voice of the tempter is none other than the promptings of Abraham’s own heart during those three momentous days. Doubt upon doubt, challenge upon challenge, the seductive voice of artificial man seeks to waylay natural man. As loving parent. As conscience. As one knowledgeable of the manner in which Jews pray.

When the moral, ethical and religious obstacles and rationalizations fall short, artificial man invokes physical obstacles, as when Satan assumes the form of a large river.

“Do you see?” the obstacle seems to cry out, “there is no good way forward.”

Artificial man thinks, “I want to do it but I cannot due to circumstances beyond my control.”

I want to keep Shabbat, but they can’t do without me in the store.

I want to send the kids to day school, but it costs too much.

I want to come to shiur Monday night, but by the time the train gets in ”

Abraham’s re­sponse? “Just for this!”

He who truly desires to fulfill his duty cannot be deterred. Just for this! Abraham plunges into the river even as far as his neck. When is the last time you and I were committed Jewishly up to our necks?

On Rosh Hashanah we are asked to remold our natural selves, to recognize all of our gifts – physical and spiritual – to integrate our artificial and natural qualities, to allow our souls the same freedom we give to our bodies.

The ideal of Rosh Hashanah is to eventually have everyone blow not only the shofar but the trumpet. Everyone can work his or her way up to the standards of the Mikdash – the Temple.

We need only stop casting away our gems!

It is said that Michelangelo came into Raphael’s studio and looked at one of Raphael’s early drawings. Without a word, he took a piece of chalk and wrote across the drawing, Amplius – “greater!” Michelangelo found the layout to be too cramped and narrow.

How much more serious it must be when God looks down on our lives and, knowing the riches we are truly capable of, writes over our plans, Amplius­! Greater! 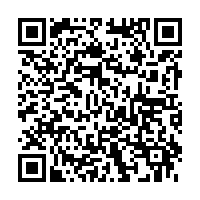