This op-ed is a response to a blog post by Emes v’Emuna.

There’s an apocryphal story about the Reform movement’s summer program for its high school students, which used to fly them to Israel to tour and work on a kibbutz, etc., then, on the way home, they would stop in Poland and participate in the March of the Living in Auschwitz. But in 2000, during the second intifada, many parents were concerned about their children’s safety in Israel — so they only took them to Auschwitz.


Modern Hebrew has a word — “galutiut” (ga-lu-tee-yoot) — which defies translation. It describes the essence of exile, the very depth of ghetto thinking, as in the Der Stürmer-like image of Israelis moving to Berlin, or a Neturei Karta guy holding up an anti-Zionist poster at a rally in downtown Tehran. If you’re Jewish and emotionally stable, you’ll recognize the essence of galutiut in the words and actions of so many Jews, starting with the meraglim (spies) of 1247 BCE and leading up to left-wing Jews who merrily turn in Arab land dealers to the Palestinian police to be tortured and even executed.

You’ll note that God in His mercy forgave the Israelites in the wilderness a lot of mischief, from forging a gold calf to dating those Moabite and Midianite gals at Ba’al Pe’or — sure, He treated those problems locally with LRP (Limited-Range Plague), but the only time He became so angry, He decided to give up on the whole bunch of them, let them die off in the desert and start afresh with their children, was when, from the bottom of their festering, slave’s galutiut, they spoke ill of the very idea of living in the Land of Israel because they feared the Promised Land wasn’t safe.

Galutiut uses the safety argument more often than any other. I knew personally a woman, now long dead, who in 1938 left Haifa, where she had settled a decade before, to visit all her family members who were still living in Germany to convince them to sell everything and follow her to Haifa. Without an exception, every one of them told her to calm down, Chancellor Hitler is an animal, of course, but his day will come, and meanwhile it’s still a lot safer living in Hamburg than in Palestina…

Galutiut often uses values like ‘love and pity,’ as in the case of the 2005 brute eviction of some 8,000 Jews from their homes in Gush Katif, the Gaza Strip, when there was an outcry from some on the left that the children of those stubborn settlers must be forcibly removed from their parents who are placing their welfare in jeopardy.

Galutiut uses exalted notions like ‘justice and truth’ to destroy Jewish homes on land that was legally purchased or acquired, giving instead absolute credence to Arab claims of dubious origin. The same galutiut forbids Jewish families from expanding their homes or enclosing a porch in Judea and Samaria communities, because this would harm the chances of the two-state-solution.

Galutiut uses all the above concerns, mixed and matched with examples of individual Jewish failure (Baruch Goldstein & Yigal Amir); divine decrees (I beseech you, daughters of Jerusalem, do not stir up or awaken the love until it is sought); self-righteousness (Why can’t you get along with the Arabs?).

Galutiut can be practiced just as easily in downtown Tel Aviv as in Chicago. Galutiut resides in the runaway slaves asking Moses, “Is it because there were no graves in Egypt that you have taken us away to die in the wilderness?” and in these callously woven lines, care of Rabbi Harry Maryles’ Emes Ve-Emuna blog entry The Settlers of Chevron:

“Those settlers are there for only one reason – to assure that not a single inch of Eretz Yisroel is ever turned over to the Palestinians. Especially not Chevron. So wrapped up are they in this goal that they are not beneath committing criminal acts. And in one of the more extreme cases, mass murder was committed by one of their more esteemed members, Dr. Baurch Goldstein.”

The title of Rabbi Maryles’ piece, which is so dripping with galutiut you could drown your pintele Yid in it, says it all: “The Settlers of Chevron.” It’s not going to be a critique of something specific those settlers have done which offended the author’s sensibilities — it is the very concept of settlers who are in the city of the patriarchs, purchased for four hundred silver shekels (roughly 100 silver dollars) by an old Iraqi Jew looking to bury his beloved wife.

In Bereshit Rabbah 79:7, Rav Yudan bar Simon says: “There are three places the nations of the world cannot mislead the Jews by saying You’ve stolen them: the Cave of the Patriarchs, the Temple Mount, and Joseph’s Tomb.” And he brings verse citations showing how each one of these were legally bought at the full price. Have you asked yourselves, those who are familiar with the midrash, how come these three locations are the most hotly contested Jewish purchases in our time? Can it be that the other side knows better than we, how crucial they are to our very claim to the land? Isn’t it why they shoot our babies with sniper rifles in Hebron, firebomb us on Temple Mount, and burn down Joseph’s Tomb?

Writes Emes Ve-Emuna (which in this instance appears to possess neither):

“I don’t know if those settlers did or didn’t have a legal right to occupy those buildings. But in my view they endanger the welfare of their people. Their presence in or near that city is an incitement that is unnecessary and a source of anger to Palestinians. Which increases the chances of more Jews being harmed of killed.”

Or, as the meraglim put it (Num. 13:33), reporting on their experience in Kiryat Arba-Hebron: “We even saw giants there, the descendants of Anak. Next to them we felt like grasshoppers, and that’s what they thought, too!”

Rabbi Maryles doesn’t know if his fellow Jews are right or wrong, all he knows is that they’re wrong. And in almost the very language as the meraglim, he is certain their insolence will anger the Palestinian giants who view them as “grasshoppers.” If you’re not a mystic, you can surely see the parallels between those two texts; if you are a mystic you probably need help getting off the floor right about now (especially the hefty mystics).

The author now drags a great rosh yeshiva into the fray, whom he cites as having said “he would even give up the Kotel if it would bring genuine peace.” But, you know, with all due respect, we in Israel have already given up the entire Temple Mount and still there’s no fake peace, never mind genuine. Incidentally, was there peace in the land before we had a Kotel to trade for it, in say, 1929? No? 1936? 1948?

Finally, without a doubt the most galuti of galutiut elements in this mix of national and religious alienation and sheer rish’us (meanness), is this part: Pikuach Nefesh. The author justifies maligning fellow Jews, libeling them, dubbing them murderers and thieves, because he cares for their safety. Exactly like the sweet women from Tel Aviv who urged police to tear the children of Gush Katif from their mothers’ arms — for their own good.

A Jew sits in Chicago, around him the campuses are rife with live, burning anti-Semitism, 800 miles from his home a bunch of Arabs ran two passenger planes into a major city’s tallest buildings, his children are punched in the face by passing gentiles because it seems like a good idea, his country is infiltrated by anti-Semitic zealots, he can see how, across the Atlantic, hundreds of thousands of fellow Jews are preparing to flee their homes for fear of ethnic persecution — and he worries about the Pikuach Nefesh of the largest Jewish community on the planet, with the strongest army in its region and then some, with a robust economy and a vivacious, multicolored society. He worries that the Hebron settlers’ “presence in or near that city is an incitement that is unnecessary and a source of anger to Palestinians.”

There’s only one solution to this ultimate galutiut, the galutiut of an educated man who knows his Torah and yet concocts from it a poisonous potion: stay. That’s the worst divine punishment. Stay where you are, in Chicago, Illinois. Don’t come over, don’t embrace the biblical promise, don’t get excited over the gifts from God the rest of us are sharing. Just spend the next 40 years exactly where you are, next to Lake Michigan, in a wilderness of your own making. 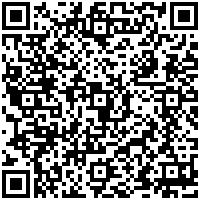