The Megillah is jam-packed with secrets which have been explored by our commentators for centuries. My favorite secret has to do with Queen Esther’s three requests of her husband, King Achashverosh: first, inviting him and Haman to join her in a ball; second, asking to hear her take on the decree against the Jews; and third, asking to revoke the same decree.


I checked and found that this phrase is used at least fourteen times in the Bible. Here’s the list:

Gen. 18:3, Abraham says it to his three angelic visitors after he had circumcised himself.

Gen. 30:27, Laban says it to Jacob following a death-warning from God.

Gen. 33:10, Jacob says it to his brother Esau who had vowed to murder him.

Gen. 47:29, Jacob says it to Joseph who would have to persuade the Pharaoh not to bury Jacob in Egypt.

Gen. 50:4, Joseph is begging the Pharaoh to let him take his dead father to Canaan.

Exodus 33:12-13, and Exodus 33:16, Moses is seeking God’s forgiveness after the gold calf incident, and then seeking to see God.

Exodus 34:9, Moses begs God to walk among the Israelites and forgive them.

Num. 11:15, Moses seeking God’s help in dealing with the people who reject the Manna and want meat instead.

Jud. 6:17, Gideon asks God’s messenger for a sign that he is really who he says he is.

Sam. I 20:29, Yonatan is quoting David to his father, King Saul to cover for David’s escape.

Israeli transpersonal therapist Yifat Aharon noted the simple meaning of the words themselves: will I, myself, find in your eyes the presence of grace towards me? In other words, will I see in your eyes something that will ingratiate me in you.

In the phrase I appear to be passive, but a deeper examination reveals that I am the active component: it is my active seeking of your grace that ingratiates me in you.

Phase 1: your view of me is unknown, or even, possibly, hostile.

Phase 2: I seek to discover whether you possess grace for me.

Phase 3: You possess grace for me.

Dr. Moran Gam Hacohen, Lecturer and Pedagogic Instructor in the Department of Bible and Jewish Culture at Seminar Hakibbutzim, suggests the phrase is a magical spell, which has the power to reverse the outlook of an adversary in favor of the person who casts it.

She does not necessarily mean it literally, but the assertion is fascinating. It means that in our dealings with adversaries, using this strategy of evoking their sympathy for us by using this inclusive tense of I-through-You-to-Me raises both of us above the negative circumstances of our mutual past to a place where You are ingratiated with Me. It introduces the possibility of our being friends in a reality where we have been anything but – and as soon as the possibility comes to life, it is also fulfilled.

Now go and manipulate all your enemies to love you. And don’t forget to bring a bottle – it’s Purim. 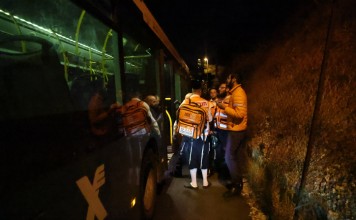