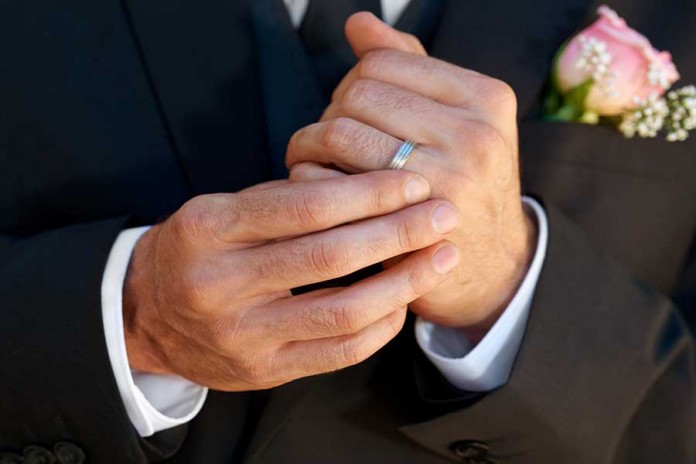 Is It Proper For A Man To Wear A Wedding Band? 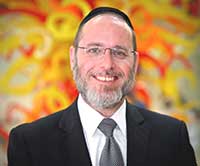 Rav Moshe Feinstein (Igros Moshe Evan HaEzer, v. 4, 32:2) discusses whether it is permissible for a man to wear a wedding band, citing the prohibition of “Bechukasayhem lo selechu,” the prohibition against “walking in the way” of non-Jews, meaning following their laws and rules.

He writes that this prohibition is NOT applicable here (meaning wearing the wedding band is permissible) because there is no law or statute amongst non-Jews to wear a wedding band after a man gets married. Since men who wear them only do so as an ornament, as jewelry, or to demonstrate they are married, and not in order to follow any non-Jewish practice, it is permitted.

There are definitely different customs in different communities regarding whether to wear one or not, and one should always be sensitive to the customs of the community in which one lives, as a part of “derech eretz.”

Having said that, there is one benefit to a man wearing a wedding band that many people have told me about; in the world of business. When a man interacts with women in the workplace and they see that he is married, that allows for certain barriers of modesty to exist, barriers that are extremely helpful.

We always have to consider our intentions in why we choose what we wear and hope that it will aid us, not detract from, our service to Hashem.

– Rabbi Dovid Rosman is the director of Yeshiva Aish HaTorah and the dean of the Gesher, Aish Gesher Women, and Aspire programs. He received his B.A. and rabbinic ordination from Yeshiva University. Rabbi Rosman’s lectures can be found on yutorah.org and www.torahanytime.com. He is the author of Torah Connections – Reaching Your Potential Through the Parashah, and the best-selling book: Your Wife, Your Self: A Husband’s Guide to Shalom Bayis.

This answer to this question largely depends on the norms of the community. If the person lives in a community where men generally do not wear rings, it would be a very significant halachic issue, it might even be forbidden.

However, if a person lives in a community where it is accepted and normal for men to wear rings, especially wedding rings, then I would think it would be actually a wise idea. A woman wears a wedding ring, as the Sefer Chinuch explains to us, to remind her constantly that she is a married woman. So too for a man to have that device, that little memory jogger to keep him focused would be a very good idea.

Especially in our day and age where morality has so slipped so far down that it is hard to recognize, if it is an accepted norm to wear a ring, it is a good idea to do so.

– Rabbi Ben Zion Shafier is founder of The Shmuz and author of 10 Really Dumb Mistakes That Very Smart Couples Make (available at theshmuz.com).

This one should really be, “Is it not proper for a man to wear a wedding ring?”

The reason a woman wears a wedding ring is understood, firstly because it was via the ring that her husband gave that the marriage was formalized. Second, because she is proud to let one and all know that she is married. However, there is no requirement that she wear the ring after the wedding ceremony, it just happens to be that such is the general custom today that married women wear their wedding ring.

Men, on the other hand, generally do not wear jewelry in the same manner as women; as such there are questions as to whether a man may go out with certain jewelry on Shabbos (where no eruv exists). Yet we do find that there are among the Sephardic community, certain men, including rabbanim, who do wear a ring sometimes as a matter of making known their high position. In that regard, think of Joseph in Egypt and Mordechai in Persia who each wore a ring as a sign of their high position – each a viceroy.

Some men wish to wear the wedding band that their wife gave them to protect them in the workplace where there might be women about, proclaiming I am married and off bounds. While there is no need for a man to wear a wedding ring, one who wears one is certainly within his bounds to do so.

– Rabbi Yaakov Klass, rav of Congregation K’hal Bnei Matisyahu, Flatbush, Brooklyn; is Torah Editor of The Jewish Press; he also serves as chairman of the Presidium of the Rabbinical Alliance of America. He can be contacted at yklass@jewishpress.com and Rabbi@igud.us.