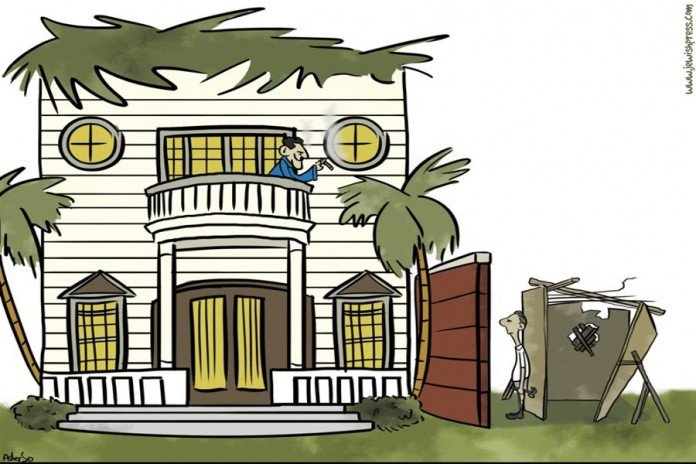 Reb Yisrael and his sons erected their sukkah adjacent to the kitchen door of their palatial home in one of the Five Towns, as they had done for many years in the past.

But this year was different.
Reb Yisrael had just learned from his rabbi that one of the reasons for residing temporarily in a sukkah is in case one’s destiny was decided on Rosh HaShana to be expulsion into galut, the departure from the comforts of home into the sukkah could be considered to be that galut.

Reb Yisrael, his wife and children left the warm comforts of their beautiful home and entered the sukkah with the knowledge that by taking up temporary residence therein, they would be absolved of any galut-related sins.

As the family continued to reside in the sukkah, they got so used to the pleasant smell of the sechach (branches used to roof the sukkah) and the pretty pictures on the walls and the overhanging decorations, that they decided to remain there after the chag!

Even though they were able to peer into their permanent home with its luxurious amenities, electrical gadgets, and state-of-the-art under-floor heating units, thick hanging drapes, lush carpets and much more, they showed no interest in returning there.

As odd as it may seem, the family became accustomed to the crowded, cold interior of the sukkah. Their relatives and neighbors tried to point out the irrationality of what they were doing, but the very idea that this was galut did little to encourage the family to return home.

When their rabbi came to visit, it was surprising that he encouraged them to remain in the sukkah rather than to return home; because it was in the sukkah that the family felt comfortable and closely knit.

In the meantime, several strangers noticed that the previously brightly-lit home was vacant, and they decided to move in as if it was indeed their own!

Reb Yisrael and his wife and children saw the strangers living in the house; but in veneration for the sukkah, they stubbornly bonded with the thin walls and dried-out sechach and refused to leave.

The whole thing was so absurd.
To leave such a beautiful home for the feeble, fallible construction of the sukkah, despite the fact that their beautiful home was beckoning them to return was beyond the understanding of any rational person.

Then came the stones thrown by the local anti-Semites who wanted to rid the neighborhood of this sukkah eyesore. Reb Yisrael and his family dodged them one by one and steadfastly remained in their fragile dwelling, rationalizing these acts as irrelevant nuisances.

Then came the terrible night when one-third of the sukkah was torched by the local bullies.
Reb Yisrael and his family were aware of what was happening, but their minds had become so warped that no amount of reasoning could move them.

To them the sukkah was home and their home was galut.

Eventually the sukkah came crashing down, killing Reb Yisrael and his entire family in their beloved galut!

If you haven’t caught on by now, let me explain:
The beautiful palatial home is Eretz Yisrael; the sukka represents all the countries to where the Jews were and are still in exile (galut). The “rabbi” who encouraged the family to remain in the sukka are the religious leaders who encourage their followers to remain in the galut, including those leaders who passively do not encourage Aliya.

The story ends with the destruction of the sukka and the death of its residents. 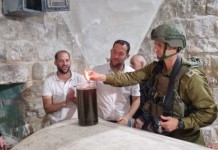 Under Fire, Israelis Pray at Yosef’s Tomb in Shechem