In 1985, Arieh and Liora Levi sold their three room apartment in Givat Shmuel and bought a four room apartment there. On the same day, the Israeli shekel was devalued by a great deal, which basically meant that the Levis were out a lot of money!

There was no way that Arieh could now pay off the apartment with his regular job in computers alone, so he started selling books door-to-door across the country to supplement his income.


One day, while he was selling in Ma’aleh Adumim, he knocked on a door. A man dressed all in khaki, with a long white beard answered. When Arieh asked him if he wanted to buy some books, he gestured to his large and laden bookcase. “Does it look like I need books?” he asked. Arieh thanked him and turned to leave.

The man called him back. “We have a guest from Bialystok,” he said. Arieh turned around to see whom he was talking about. Arieh, himself is an 8th generation Israeli. The man said he meant Arieh and told him that he was related to Rav Naftali Hertz HaLevi from Bialystok and that his life’s purpose was to publish his ancestor’s commentary on the book Brit Olam called Luchot Habrit. He further added that since his wife was an artist, she could design the cover.

Arieh had never met this man before and couldn’t fathom how he could be privy to this information. The man turned out to be the Mekubal HaRav Baruch Shapira, of whom Rabbi Mordechai Eliyahu said, at his funeral, that he was one of the lamed vavnikim, the 36 hidden righteous people of the generation.

After doing some research, Arieh discovered that his great-great-grandfather was in fact Rav Naftali Hertz HaLevi Videnboim from Bialystok, and he had been the first Chief Rabbi of Jaffa as well as a Mekubal himself.

After searching in various libraries for the book, he met a man who was visiting Israel for two weeks from America who was able to lead him to the hidden book that the Rav had written. And they also discovered in the book the first part of the commentary which had been previously lost.

In 2002, on the 100th yahrzeit of Rav Naftali Herz HaLevi, Arieh’s father gave him money to publish the book, for which his wife Liora did, in fact, design the cover. The sefer also includes the genealogy linking Arieh Levi with his illustrious great-great-grandfather, and was dedicated to the memory of Arieh’s brother, Yossi , Hy”d, who was killed in the First Lebanon War (Peace for Galilee) in 1982.

The Levis also went to Har Hazeitim, where Rav Naftali is buried, to visit his grave.

Eighteen years later, Arieh and Liora were now living in Hoshaya, a yishuv in the Galil. Arieh suffered a stroke. He was on a respirator and comatose. During that time, Liora found, at an auction, written in the hand of Arieh’s illustrious ancestor, Rav Naftali Herz HaLevi a paper saying that it is a segulah for a complete recovery and long life to give 89 prutot (the currency of the day) for the illui neshama of Rabbi Meir Ba’al Haness. Liora hastened to obey (in new Israeli shekels) and the next day, Arieh regained consciousness. He is now Baruch Hashem, in good health and continues to fulfill the directive of Rav Shapira by publicizing his great-great-grandfather’s work.

Brit Olam with the Rav’s perush is available by contacting Liora Levi at: liorameiri@gmail.com. 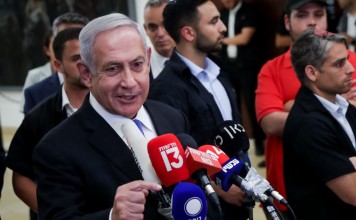