Esther Schuster is a septuagenarian with a story similar to many women in Israel who’ve made aliyah. A third generation frum American, she made aliyah with her husband to Jerusalem in 1968 when the country was still aglow with its victory and idealistic in its innocence. She raised a family and faced triumphs and challenges. And you’ll be hard pressed to find her name on the Internet. Fame is not something she seeks. In fact when I wanted to talk about her, she asked, “But why me?” in all incredulity and modesty though she is happy to share her life story with complete honesty and candor.

Having a famous public figure as a husband, the famous Man of the Kotel, Meir Schuster, z”l, meant that she made the protection of her privacy and that of her family a priority. Of course her husband brought home people for Shabbos, but Esther made it her goal to keep her husband’s world of kiruv and the world of her family separate so that neither would be compromised. For example, although the Schusters lived in many parts of Jerusalem, she never agreed to move to the old city because she didn’t want her home to be a free for all. Esther appreciated her husband and his work, but she knew where her priorities lay as a Jewish mother. And though her husband’s prominence brought her in contact with many illustrious rabbanim, she never sought the limelight.


Esther says that she’s had a few trials in her life and the key to her faith is looking at the positive and not harping on the bad. Something she’s worked on perfecting her whole life. In 1975, the Schusters lost their six-year-old daughter Yocheved Faige Dena, nicknamed Shatzi, in a car accident which was devastating for her. In 2014, Esther lost her husband after an eleven-year-bout with dementia, and on her husband’s first yahrzeit, her older single daughter agreed to meet the man who would become her husband, ending many years in shidduchim, which was hard for a mother to navigate.

But Esther is upbeat and she gives chizuk to others. She understands that everyone’s struggle is different. “I have three children and one on Har HaMenuchot,” she says. She relishes her grandchildren and one great-grandchild (ken yirbu). She perpetuates the memory of her husband whose works she supported from the home front, and her daughter married a wonderful man who has a lot in common with her husband. She says, “Even the worst situations have chesed – Haboteach b’Hashem, chesed Yessovevenu.”

I’m sure that Esther Schuster had more than just the challenges she described to me. The fact that she could focus on so few over a lifetime reflects a person of emunah. Her support allowed her husband to do what he did best and the tens of thousands of religious Jews her husband introduced to the fold are as much to her credit as his. Like Sara Imeinu, when her husband was off doing kiruv, she was in her tent.

And it says a lot about who Esther Schuster is that the only time she says, “Why me?” is when someone wants to interview her. 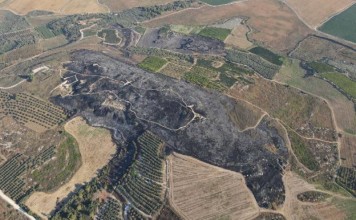