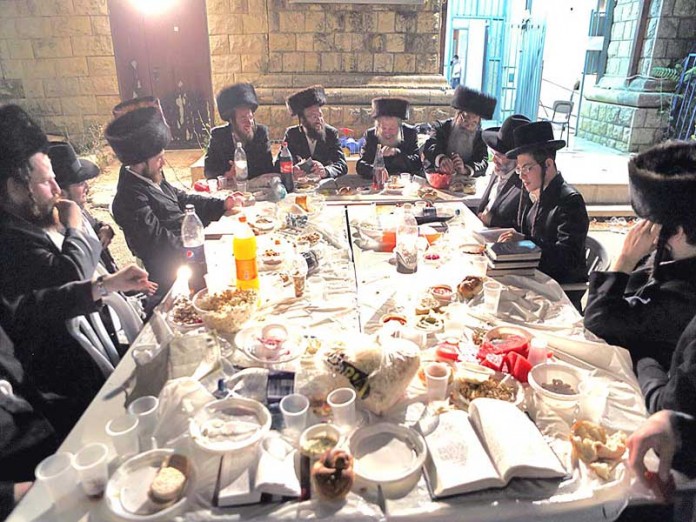 Rebbi Chanina ben Teradion said: If two sit together and there are no words of Torah [spoken] between them, then this is a session of scorners, as it is said: “nor sat he in the seat of the scornful…” (Tehillim 1:1); but if two sit together and there are words of Torah [spoken] between them, then the Shechinah rests among them, as it is said: “then they that feared the Lord spoke one with another; and the Lord listened and heard, and a book of remembrance was written before Him, for them that feared the Lord and that thought upon His name” (Malachi 3:16). Now I only have proof for two, from where do we know that even one who sits and studies Torah, the Holy One, blessed be He, fixes his reward? As it is said: “though he sit alone and in stillness, yet he takes [a reward] unto himself” (Eicha 3:28) (Avot 3:2).

What We Are Sustaining

The Chasid Yavetz explains that sharing Torah at meals is uniquely important because it defines and expresses how we view our lives. Man, like animal, needs to eat in order to stay alive. That having been said, obviously, our existence means more than that of animals. This distinction needs to be expressed when we are engaged in sustaining our lives.

The Netziv observes that, as opposed to other living beings who were described as ‘alive’ as soon as Hashem created them, Adam HaRishon is described as alive only after Hashem added his soul (Ha’emek Davar to sefer Bereishit 2:7). In his commentary to sefer Devarim the Netziv uses this idea to explain why the Torah links our lives to mitzvah observance. For a human being, and especially for a Jew, life is only significant when it is infused with mitzvah observance (Ha’emek Davar to Devarim 4:1).

Onkelos makes this point in a very subtle, but powerful, way. The Torah (Devarim 8:3) writes that man lives not off bread, but, rather, through the word of G-d. Whereas the Torah uses the same word “yichyeh” to describe man’s survival off both food and the word of G-d, Onkelos uses a different word to describe the latter – “chaye’ei” as opposed to “mitkayem” (Targum Onkelos to Devarim 8:3). (Note that there are differences between different editions.) Though we can survive off bread, we only truly live when we involve G-d in our lives.

This also explains Rebbi Akiva’s famous comparison of a Jew’s need for Torah to a fish’s dependency upon water (Masechet Berachot 61a). Though a person can survive physically without Torah, their true life is lost without it. This is why reshaim, even when they are alive, are considered dead: their lives mean nothing more than their physical existence (many places, especially Midrash Tanchuma to Devarim 7).

A lack of this perspective can allow the pursuit of food and survival to cloud our judgment.

When considering whether to trade his bechor rights for a pot of stew, Eisav reasoned that, as he would die in any case, he had no need to be the bechor (Bereishit 25:32). When tired and hungry, we are anxious to revive and sustain ourselves with food. This anxiety can cause us to lose sight of the bigger picture and purpose of our lives, eating like animals rather than as humans.

The Kuzari (sefer Hakuzari 3:1-30) famously explains that this is the purpose of the berachot we recite before and after eating. A beracha expresses our appreciation of the special significance sustaining our lives (as opposed to those of animals) has. In our mishnah, Rebbi Shimon teaches us that we should express this appreciation not only by thanking Hashem for our food, but also by putting the meaningful content of our lives – Torah learning – on the table. Sharing Torah expresses our belief that the lives we sustain by eating matter because of the Torah we learn and the mitzvot we fulfill.

We Are Why We Eat

Rebbi Shimon adds that those who do not share Torah at meals are considered to be eating from “zivchei meitim.” The Chasid Yavetz explains this term as referring not to the state of the food (which is, of course, dead), but to the status of the consumer. Because a person who does not include Torah as part of their meal is himself not alive, he is considered to be eating a meal that belongs to the dead. Though the food he eats sustains his physical life, he is, in actuality, considered dead.

Rav J. B. Soloveitchik (Reflections of the Rav, pg. 214) expressed a similar idea: “Transforming an animal need into an act of worship is a uniquely Jewish idea. The table is referred to in our tradition as an altar, and meals which are associated with religious observances are called se’udot mitzvah.” Rav Soloveitchik spoke of a seudat mitzvah – a meal eaten as part of a mitzvah. Rebbi Shimon teaches us that even regular meals eaten as part of our daily lives can be elevated – by sharing Torah at them.

We live in a world that sees food along with sexuality as goals to focus upon instead of means of survival. This expresses and reinforces a lack of an appreciation of life’s deeper meaning and purpose. Let’s make sure to share Torah over meals in order to define our lives. May doing so give us entry to Hashem’s table!