The Bible uses two Hebrew words for tax, “mas” and “meches,” and three Aramaic words for tax, “minda,” “belo,” and “halach.” An additional three appear in the Talmud, “karga,” “arnona,” and “taska.”


1) In his Yerios Shlomo, he suggests that its root is the letter samech alone, which denotes “rejection” and “disassociation.” (Other words derived from this letter include “nas” [fleeing], and “ma’us” [disgusting].) When a person pays a tax, he gives it to the authorities and thereby disassociates himself from it.

2) In his Cheshek Shlomo, Rabbi Pappenheim proposes that the root is mem-samech, which means melting or disintegrating. Taxes melt away and disintegrate one’s assets.

3) Also in Cheshek Shlomo, Rabbi Pappenheim suggests that “mas” is derived from the root sin-aleph, which means carrying or lifting. Taxes represent a burden that one must carry. Interestingly, the Oxford English Dictionary has two definitions for tax as a noun: “a compulsory contribution to state revenue” and “a strain or heavy demand.” If Rabbi Pappenheim is right, the second meaning is actually the basis for the first.

Although “mas” is typically translated as tax, some scholars argue that a more accurate translation would be corvée work – that is, a system of compulsory, unpaid labor, or civil service imposed by a sovereign. This translation is borne out by the Bible in several places. For example, the Egyptian taskmasters who oversaw the enslaved Jews were called “sarei missim.” And the mandatory conscription of civilians that King Solomon instituted was called “mas” (I Kings 5:27).

Another Hebrew word for tax is meches, appearing six times in chapter 31 of Sefer Bamidbar. In that context, “meches” refers to the consecrated booty from the Jews’ war against the Midianites, which was to be given to G-d.

Rabbi Pappenheim agrees that the root of “meches” is kaf-samech, but argues that the core meaning of kaf-samech is not number, but covering. Another word with the same root – “kis” (pocket) – is a covered space into which one puts small items, like coins, to avoid losing them. Thus, the related “meches” refers specifically to a type of tax that ends up in a king’s pocket/purse (as opposed to taxes used for public works).

In Sefer Ezra (7:24), the Bible relates that Cyrus, king of Persia, releasing the Men of the Great Assembly from paying the taxes of “minda,” “belo,” and “halach” – all Aramaic words.

Rabbi Baruch Avraham Toledano (1825-1917) writes that “minda” is related to “middah” (measure or dimension) since the tax was a function of the measurement of one’s property. “Belo” is an expression of wearing out and refers to digested and worn out food. “Halach” is related to “holech” (walking or traveling), and refers to taxes used for the upkeep of transportation structures like roads and bridges.

The Talmud (Bava Basra 8a and Nedarim 62b) says “minda” is the king’s portion – apparently the Aramaic equivalent of “meches” (as explained by R. Pappenheim), i.e. a tax for the king.

“Belo,” according to the Talmud, means gulgalta money, and “gulgalta” means the same thing as “karga” (derived from the Persian “karaka” and/or Arabic “harag”), which is a “poll tax” or “head tax” (see Rashi to Bava Metzia 73b). “Gulgalta” is actually an Aramicization of the Hebrew word “gulgolet” (skull).

The Talmud explains that the third term, “halach,” means “arnona,” a “crop tax” levied on farmers. Rashi (to Pesachim 6a and Bava Basra 8a) explains that “arnona” was an annual tax of one tenth of one’s animals and grain. Historians actually record that a tax called annona was used to supply grain and other foodstuffs to Rome in the era of the Roman Empire. “Annona” was derived from the Latin word “annus” (the source of the English word “annual”) because it was calculated from the sum total of the year’s harvests.

Rabbi Nosson of Rome in Sefer HaAruch explains that arnona was actually a meal that each city had to supply to the king or army when they traveled through that city. Rabbeinu Nissim (to Nedarim 62b) writes that “arnona” actually means meal in Greek. Alternatively, it means partnership (which is why the river between the Moabites and Emorites was called Arnon [Numbers 21:13]).

Another Talmudic term for tax is “taska,” which means property tax (see Rashi to Gittin 58b, Bava Metzia 73b, 108a). Elsewhere, though, “taska” means sack (Rashi to Megillah 7b) or basket (Tosafos to Avodah Zarah 14b), so it seems that property tax is simply a borrowed meaning.

In Modern Hebrew, property tax is “arnona,” “mas” is a generic word for tax, and “meches” is a customs tax. 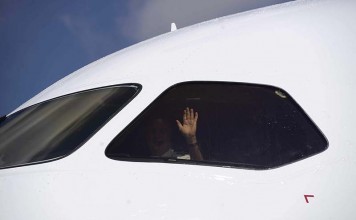