A police operation to confiscate illegal weapons in Arab localities in northern Israel led to the exposure of a treasure trove of apparently stolen archeological artifacts.

Border Police troops operating on Wednesday with police detectives in the Arab town of Abu Snan in the Galilee to locate weapons searched the home of a suspect.

During the search in the yard of the house, a small bag containing hundreds of ancient coins was found hidden under a rock. Later, a number of ancient sculptures were seized in a nearby warehouse.

The suspect, a local resident in his 30s, was arrested and the findings were transferred for investigation to the Israel Antiquities Authority.

Felons committing antiquities-related offenses can face up to five years in prison under Israeli law. 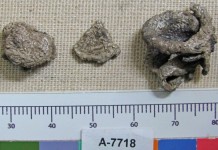