The Arab-Israeli Balad political party issued a statement strongly condemning the normalization of relations between Israel and Sudan, the third peace treaty Israel has announced with a Muslim country in the past two months.

Balad stated that the agreement “is a sign of disgrace on the forehead of the Sudanese regime, a stab in the back of the Palestinian people, and a gift given to Israel without any return.”


Prime Minister Benjamin Netanyahu announced on Friday “another dramatic breakthrough for peace, another Arab state joining the circle of peace. This time, it is normalization between Israel and Sudan. What a great turnaround!”

The leaders agreed to the normalization of relations between Sudan and Israel and to “end the state of belligerence between their nations.”

Similarly, Members of the Joint List, which consists mostly of Israeli-Arab Members of Knesset and of which Balad is a member, voted against the ratification of the peace agreements between Israel and the United Arab Emirates (UAE) and Bahrain in the Knesset earlier this month.

The Joint List alleged that the US-formulated Deal of the Century peace plan is “part of a clear plan to eliminate the rights of the Palestinian people. The purpose of this plan is to perpetuate the occupation and the settlements, and most importantly – to prevent the establishment of a Palestinian state within the 67 borders with its capital, east Jerusalem.”

“Replacing the principle of peace for territories with Netanyahu’s deceptive vision of peace for peace will bring disaster to the country and all its inhabitants. This approach ensures the continuation of conflict, suffering and bloodshed,” the Joint List claimed. 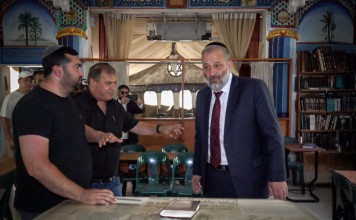