On Monday, May 18, newly-appointed Israeli Minister of Justice Ayelet Shaked (Bayit Yehudi) gave an address to the Israeli Bar Association at the southern seaside city of Eilat.


The Israeli Supreme Court is highly activist, and has derailed significant legislation passed by the Knesset. For those who believe in the right of the popularly elected branches, the two branches of government which must answer to the people, the notion of the non-elected branch having broad power to overrule the will of the majority is unnerving.

It is even more unnerving when membership in that branch is conferred, as it is in Israel, by a nine-member committee, most of whom are not accountable to the electorate. Two of those votes are cast by completely private parties, chosen by the Bar Association itself — whose members routinely appear before the very judges they put on the Court.

The 39-year-old Shaked said: “only a genuine separation of powers will ensure the survival of democracy, the balance of which is subtle. The meaning of the word ‘democracy’ is the rule of the people. The people are sovereign and choose their representatives.”

“I would like to reinforce the authority of the executive branch, while maintaining the independence and status of the judicial branch,” Shaked continued.

“In recent years it seems a large part of the public has been under the impression that this outlook (of judicial restraint) has diminished. It seems decision making – governance – is no longer under the control of the people – their elected officials in the Knesset – but is held by the judiciary. The issue is at the heart of a contentious public debate,” Shaked stressed.

It is expected that Shaked will work to re-assert the separation of powers during her tenure as Justice Minister. During the coalition negotiations she submitted several bills the purpose of which would be to limit the Supreme Court’s interventionism. One example of such a legislative effort is to enable the Knesset to ratify laws struck down by the Supreme Court. 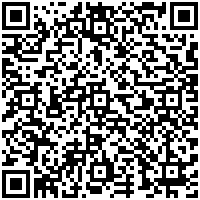