Late Thursday afternoon, at my Beit Hadassah home, here, in Hebron, I received a text message – in Hebrew, four words: “Zachinu b’tik Beit HaShalom” which, in simple English means, we won. We won the court case for Beit HaShalom.

We knew that a decision was imminent. Final arguments had been presented. It was a question of time until the judge ruled.


We knew that, according to the facts presented, our chances were good. But in Israeli courts, facts aren’t necessarily a deciding factor. You never know.

I was stunned. I couldn’t believe it. An Israeli court ruled in our favor. Tears came to my eyes, and muttering something, but not really speaking, I held up the phone so my wife could read the notice. Then I recited the age-old blessing said upon happy events: Shechechianu – Blessed is He that allowed me to be present for this joyous event.

Beit HaShalom was purchased for an extravagant amount of money by Morris Abraham and his family. We moved in on March 19, 2007. We remained there until Ehud Barak, then, too, the minister of defense, ordered the police and IDF to throw us out, on December 4, 2008.

The Arab who sold the building, Mr. Rajabi, claimed that we had stolen his property. We had a film of him counting the money paid for the building. He argued that he’d changed his mind and returned the money. In court, when asked to provide proof that he’d returned the money, he admitted that he had no receipt or document of any kind. “We Arabs do everything based on trust,” he said.

Anywhere else in the world, such a case would never have reached court. But in Israel, the rightful owners were expelled, the building was sealed and guarded, and the court case commenced.

Four years in court, tens and hundreds of thousands of dollars in attorney’s fees, more hours than can be counted invested. Knowing that justice isn’t necessarily a key factor in such cases.

Yesterday we won. The court ruled that the government has up to 30 days to return the building to us.

Pictures flashed through my mind: rain and snow blowing through window-openings, when Barak refused to allow real windows to be installed. One of my daughters lived there with babies. Her floor was a big puddle. Our comrade, the late Eyal Noked z”l, working tirelessly, day and night, to make the apartments minimally livable. Knesset members, ministers, petitions, whatever, in an attempt to convince Barak to change his mind. To no avail.

What must happen next? Following the recent expulsion from another legally purchased building in Hebron, Beit HaMachpela, it is well known that, according to present Israeli law, the defense minister must sign permits allowing Jews to purchase property in Judea and Samaria. Without this, he can have Jews expelled from such homes.

This is easily resolvable, of course, to follow the learned conclusions of the Levi Commission, which, contrary to the U.S. intelligence opinions, ruled that civilians living in Judea and Samaria, and in places like Hebron, do not, in any way, violate international law, the Geneva Convention or the Hague accords. The commission determined that such rules, demanding expressed permission from government officials to purchase property in Judea and Samaria, are totally superfluous.

But responsibility does not rest with Barak, but rather with the Prime Minister, the Cabinet, and the Knesset – the present legal framework under which Israel is governed.

If I bought a home in London and was told that a Jew purchasing a home on “that side of the city” would cause a violent reaction, how would that be viewed? Probably as anti-Semitism and racism. Why, then, can’t a Jew buy property in Hebron, just as people purchase homes all over the world?

Recently, a paper was claimed to have been presented to U.S. President Barack Obama, called: “Preparing For A Post Israel Middle East.” Written by the U.S. Intelligence cream of the crop, the paper concludes that the American national interest in fundamentally at odds with that of Zionist Israel.

As we reported, that while this report garnered a lot of publicity in certain circles, it is unlikely that there was any truth that to its claim, but still, it was taken seriously in some circles, and its conclusion, in short, is the world, i.e. the United States, would be better off without an Israel.

Many of the reasons detailed in the paper have to do with the Jewish presence in Judea and Samaria—the extremist, violent “settlers” and the anti-democratic, apartheid-like state of Israel.

Perhaps the most appropriate response to that paper on the part of Israel would be the immediate return of Jews to Beit HaShalom and Beit HaMachpela, here in Hebron, basically telling the authors exactly what we think of it and them. 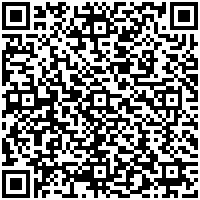