“The Sensory Concrete Barrier surrounding Gaza will be finished within the next four to five months. However, even when it is done, we will need to remain vigilant as we are aware that Hamas will not stop trying to attack Israel despite the challenge this barrier creates,” said Chief of the IDF’s Engineering Corps, Southern Command, Col. Yuval Moshe last week during a special event, part of Friends of the Israel Defense Forces’ (FIDF) “Behind the Headlines” virtual series.

The multi-million dollar concrete wall is fitted with sensors and reaches dozens of meters deep into the ground, standing six meters high above ground level.


Moshe discussed unearthing terror tunnels, focusing mainly on the network of sophisticated terror tunnels branching beneath many Gazan towns and cities and leading into Israel, which emerged following Hamas’ control of the Gaza Strip beginning in 2007.

Most recently, the IDF exposed on October 20 a Hamas terror tunnel that infiltrated into Israeli territory from the Khan Younis area in the southern Gaza Strip.

The tunnel route was discovered during “the continuous effort to locate and neutralize terror tunnels, and thanks to the technological and collection capabilities of the underground Sensory Concrete Barrier along Israel’s border with the Gaza Strip,” the IDF stated.

The terror tunnel did not cross the Sensory Concrete Barrier and there was no threat to nearby Israeli communities, the military underscored.

In 2018, Israel also discovered a similar tunnel system near the Israeli border with Lebanon constructed by Hezbollah.

“We know that Hamas is still working on new terror tunnels underneath our border as we speak and is not giving up on its ultimate goal to send terrorists through these tunnels into Israel,” the Israeli senior commander added.

Moshe, who initially drafted to the IDF as a combat engineer, has served in the IDF for 20 years. 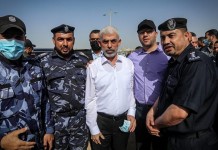