Instead of fighting a losing battle against Middle East normalization, the Palestinian Authority now hopes to mobilize the new friendly-with-Israel Arab states to pressure concessions from Israel.

Ehud Yaari, a senior news commentator on Arab affairs on News 12, told Erel Segal and Yariv Oppenheimer (of Peace Now fame) on 103FM Sunday morning that Israel’s latest normalization agreements with Morocco and Bhutan represent the collapse of the isolation and boycott wall and the crashing of the veto power that the Palestinians have held for the past 70 years.


Yaari, 75, has been reporting and commenting on Middle East affairs since 1969, spent long stints in Egypt and Lebanon, and was Channel one’s correspondent in Washington, DC. He has interviewed Yasser Arafat, King Hussein of Jordan and his son Abdullah, President Husni Mubarak of Egypt, almost every Israeli prime minister since Menachem Begin (including Yitzhak Rabin), Syria’s Bashar al-Assad, Lebanon’s Bachir Gemayel, and Libya’s Muammar al-Gaddafi. A vociferous opponent of the Oslo Accords, Yaari is Senior Fellow at the Adelson Institute for Strategic Studies.

Asked how significant is the agreement with Morocco, the senior commentator said, “I think it can be seen that like a row of domino tiles, the Arab states, each in its own way, not all in the same mold, will start normalization with Israel, and Morocco chooses to do so in two stages. The first stage is liaison offices, trade centers, and direct flights. Step Two, after Biden approves the annexation of the Sahara, there will be embassies, and other countries will follow a similar path.”

The normalization process has not been exactly a show of great love – what is actually going on here?

“In every agreement, always, even when we signed peace agreements with Egypt and Jordan years ago, and in some ways in the Oslo accords, too, there’s always been an American aspect to the agreement. The Arab state always wants not only Israel but also something from the United States,” he said, explaining, “There’s no big news here, either. Morocco has been vying for 45 years for recognition of its ownership of occupied Western Sahara and has failed, and now it has achieved it. Sudan for its part wants to be taken off the terrorist state’s list, and the emirates wanted other things.”

“Also, beyond the fact that they want something from the Americans, they want things from Israel,” Yaari pointed out. “A country like Sudan wants Israeli aid, Israeli know-how, to modernize its agriculture which has enormous potential. The Moroccans have a different approach. Historical. For many centuries, the Jewish of Morocco has been part of the national heritage, it is not something foreign that’s separated or divided.”

As to the impact of the changing occupants at the White House on these agreements and the ones that are yet to follow, Yaari believes “these agreements will stand long after Trump and Bibi, and I would not describe these peace agreements with Arab countries as a negligible thing that can be overlooked.” But above all else, he said, “in the Palestinian Authority from Mahmoud Abbas down, a dramatic decision has been made that has not yet been announced, and that is – not to stand in the way of peace agreements between Arab countries and Israel.”

He added: “They realized they could not stop it, it’s impossible to fight it, and they have to adapt to it. Now—and what I’m saying is authoritative—they want to mobilize the countries that are normalizing with Israel. This is why al-Sisi invites Bibi to renegotiate and look for a format for an arrangement that is not a permanent arrangement, not one that ends the conflict but an arrangement that changes the face of reality, of life on the ground, supported by precisely the Arab states that have established ties with Israel. It’s a revolution.”

Yaari believes that the Biden administration stands a chance of winning in the region if they would go “something that’s a large, broad, generous interim arrangement that changes reality but does not resolve the conflict – this has a chance.” But he adds: “It also depends on which government we will have.” 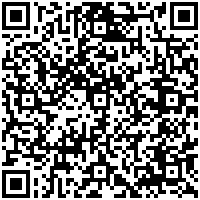