Arouri had entered quarantine and was “doing well,” Hamas said in an official statement.

Arouri is believed to have contracted the disease while meeting with Fatah officials in Turkey two weeks ago to discuss ending longtime strife between the rival Palestinian factions, which have recently announced they would join forces.

He also met with Hezbollah leader Hassan Nasrallah over the weekend of Sept. 5 as part of a delegation led by Hamas leader Ismail Haniyeh.

Arouri is considered to be Hamas’s commander in Judea and Samaria and is the mastermind behind the group’s relentless attempts to expands its terrorist infrastructure in the area—something that severely undermined the rule of Palestinian Authority leader Mahmoud Abbas.

He also served as a recruiter and the Islamist group’s chief financier, raising and transferring funds on its behalf.

Arouri is on the United States’ list of most-wanted terrorists and has a $5 million bounty on his head as part of the States Department’s Rewards for Justice Program.

Arouri is believed to be living in Istanbul. As a top target, Hamas has been trying to obscure his whereabouts and in recent years rumors have circulated that he left Turkey and is shuttling between Lebanon and Qatar. 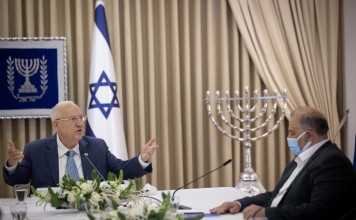