Interior Minister Aryeh Deri on Monday signed an order banning three Hamas operatives from leaving the country. The three are linked to the Hamas headquarters in Turkey, the order said.

The Ministry stated that intelligence material presented to Deri indicates that the three are Hamas activists “who threaten the security of the state.”

Several of the terrorists released in the 2011 deal to release IDF soldier Gilad Shalit reestablished themselves in Turkey and now manage several Hamas operations from the country. They are tied to these operations.

Deri noted that that the departure of these three from the country could “significantly harm the security of the state and increase the risk of terrorist activity in Israel,” and he therefore banned them from leaving.

The order is valid for a month, after which Deri can decide whether there is room to extend it.

An in-depth investigation by TPS into Hamas operations in Turkey exposed an elaborate network of senior terrorists who work around the clock to promote terrorism against Israeli targets while operating unhindered on Turkish soil.

Hamas headquarters in Turkey focuses on military buildup and terrorism. Its divisions are responsible for procurement, development and recruitment. Its activities in Turkey and Lebanon are a complicated mission and to that end, the former Hamas prisoners have set up Hamas military administration and management of terrorism.

Hamas “Construction Administration” (Dairat al-E’emar) in Turkey is active in the fields of intelligence, operations, personnel security, information security, logistics, planning, training and production, and is responsible for the procurement and development of advanced weapons, fundraising and terrorist financing.

Hamas’ efforts to equip itself with rockets and Unmanned Aerial Vehicles (UAV) are also at the center of its activities.

The finance department is a huge mechanism for paying salaries and purchasing equipment and technology. The department has offices in Istanbul.

Hamas’ HQ for its terror operations in Judea and Samaria and their financing operation works out of Turkey. 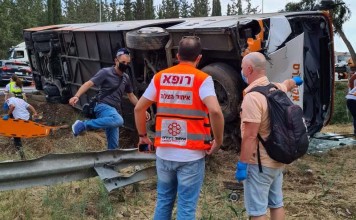