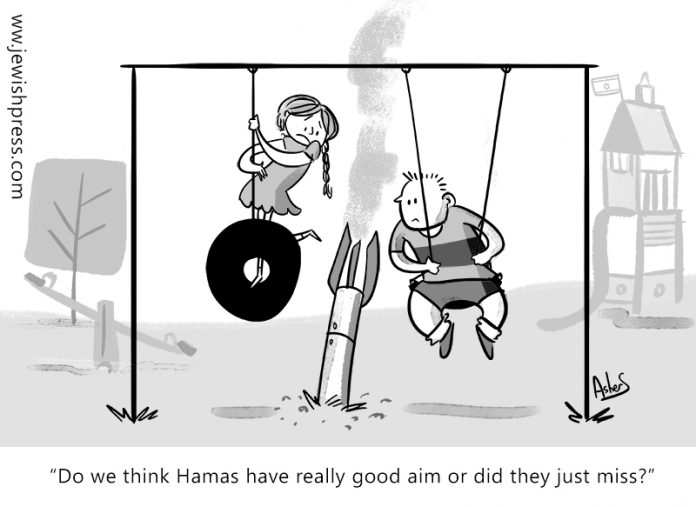 Arab terrorism in the Land of Israel throughout 2018 showed two main trends: the increase of violence from the Gaza Strip after about three and a half years of relative quiet, and the increased number of Arab terror attacks in Judea and Samaria, according to a comprehensive survey on the subject.

The Meir Amit Intelligence and Terror Information Center (ITIC), which published its annual study that analyzed these two main trends, noted that after about three and a half years of relative quiet after Operation Protective Edge the level of violence emanating from the Hamas-controlled Strip has significantly increased, and one of its manifestations was the 1,119 rocket and mortar shell that exploded in Israeli territory, compared with 31 in 2017, the highest annual number in the past ten years, with the exception of Operation Protective Edge in the summer of 2014.


The terrorism and violence coming out from Gaza were led and modulated by Hamas. Hamas decided on a new policy of controlled violence to exert pressure on Israel to promote the organization’s objectives, which are the easing of Gaza’s economic distress, opening of the border crossings, and receiving payments for its officials while avoiding a comprehensive military confrontation.

In Judea and Samaria, popular terrorism continued in its various forms, primarily stabbing, vehicular and shooting attacks. After Arab terrorism peaked in 2015 its scope decreased, but in the last months of 2018, there was an increase in the number of attacks.

Shin Bet (Israel’s Security Agency) head Nadav Argaman, briefing the Knesset’s Foreign Affairs and Defense Committee in November, revealed that 480 significant terrorist attacks were prevented, that is, close to nine significant attacks were prevented for every one carried out. These preventive activities indicate, according to Argaman, the great potential for terrorism simmering under the surface.

The Palestinian Authority (PA) and Fatah in Judea and Samaria continued their support for the so-called “popular resistance,” i.e., terrorism, but prevented Hamas from turning it into military-grade terrorism that would lead to a mass uprising against Israel and destabilize the PA.

2018 was less lethal, with 12 Israeli civilians and soldiers killed, as opposed to 18 in 2017. A total of 74 Israelis were killed between the beginning of the wave of popular terrorism in October 2015 and the end of December 2018.

Most of the attacks were carried out in the Ramallah region. In greater Jerusalem, which in the past was the preferred arena for terrorist attacks, there were eight attacks in 2018, as opposed to 20 in 2017.

Most of the attacks were carried out by lone-wolf terrorists with various motivations. In ITIC assessment, their motivation was mostly nationalist. The profile of 2018 terrorists, 31 men and one woman, was similar to that of previous years: most of them were young men in their 20s, most of them without a criminal or security record, and most were not affiliated with an organization.

In the ITIC’s assessment, the trends in terrorism and violence in 2019 will see the continued efforts by Hamas and other terrorist organizations to establish terrorist networks in Judea and Samaria. In 2018 Hamas’ efforts failed.

Popular terrorism will continue with PA and Fatah support, the ITIC estimates. The weakening of the PA and the possible disappearance of PA head Mahmoud Abbas from the stage may lead to internal tensions, some of which may be turned against Israel. Given the increase in popular terrorism in recent months, the ITIC assess that terrorism may reach a higher level in 2019.

Hamas may try to exert pressure on Israel, which may increase as the general elections in Israel approach. This may lead to additional rounds of escalation during which the communities in the western Negev, and possibly more distant population centers, will be exposed to rocket and mortar shell fire from Gaza.

Hamas’ policy of controlled violence does not seek a broad military confrontation with Israel, but the violence instigated by Hamas and the other terrorist organizations, and the worsening economic situation in the Gaza Strip, create a fragile, explosive situation with the potential to deteriorate into a broad military confrontation, even if neither side wants one, the ITIC warned.

Cooling the Flame of Teenage Anger