The United Nations General Assembly on Wednesday voted to adopt its first resolution to mark “Nakba Day” – the day that marks the “catastrophe” of the rebirth of the State of Israel.

Ninety states voted to approve the resolution, with 30 opposed, including the US, UK, Canada and Germany; 47 others abstained, including Ukraine.

The resolution calls for commemoration of the “Nakba” – marked annually by Arabs on May 15 — at the General Assembly Hall in 2023 as well as dissemination of related archives and testimonies.

Undoubtedly none of those materials will be sourced from Jews who were living in the region at the time.

The “outrageous resolution” as it was termed by Israel’s Ambassador to the UN, Gilad Erdan, was co-sponsored by Saudi Arabia and the United Arab Emirates – the first signatory to the Abraham Accords “circle of peace” with Israel – along with a number of others.

“I would like to recall the historical facts behind this false “Nakba” and remind you of the true Nakba,” Erdan said.

“On November 29, 1947 – exactly seventy-five years ago yesterday – this General Assembly, this body, voted to adopt Resolution 181 – the Partition Plan. My people, the Jewish people, accepted this resolution without hesitation. But the Arabs and the Palestinians did not!

“Five Arab armies, together with the Arabs living in Israel, tried to destroy and annihilate us. But it did not end only at trying to decimate the nascent State. The Arab countries and Iran immediately began to expel the Jews living throughout the Middle East and North Africa… This is the true Nakba. Stop ignoring the Jewish Nakba!

“By supporting resolutions that single out, condemn and vilify Israel, you are telling the Palestinians that their path of incitement and terror-funding truly pays off,” Erdan warned member states. “They can continue murdering innocent Israelis, boycott any dialogue or negotiations and the international community will still stand behind them.

“How can you expect that Palestinian leadership will compromise on any of their absurd demands, when every single one of their absurd UN resolutions are adopted? If you want to resolve this conflict, stop supporting these falsehoods!”

Palestine Liberation Organization (PLO) representative to the UN Riyad Mansour told the world body that 75 years ago, “a very different General Assembly adopted a resolution partitioning Palestine without ever consulting the people of Palestine.”

The “people of Palestine” in 1948, when the State of Israel was re-established, were in fact comprised of both Jews and Arabs and the area was controlled by the British, who seized it from the Ottoman Turks. There was no “state of Palestine” nor does one exist to this day, a state of affairs that deeply upsets the Palestinian Authority.

Mansour warned that establishment of such a state may never happen, saying the moribund so-called “two state solution” has reached “the end of the road.”

The PLO representative also threatened more violence against the Palestinian Authority’s Israeli neighbors, saying, “Either the international community summons the will to act decisively (to establish an Arab state of Palestine), or it will let peace die passively.” 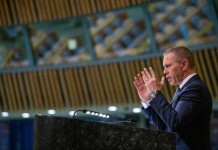 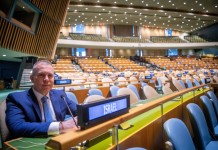 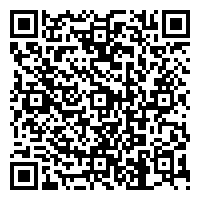