“Your visit comes at a crucial time for the Middle East,” Macron said in a joint briefing held by the two men.

“I would like to mention my country’s unwavering support for Israel’s security. You can count on my determination in the fight against terrorism that has struck Israel in recent months.”

It’s not clear exactly what concrete support France has offered Israel since the start of the violent Islamic holy month of Ramadan in which a plethora of terrorist attacks left 20 Israelis dead and wounded even more.

France has a long and illustrious history of pressuring Israel to carry out suicidal diplomatic actions with the Palestinian Authority, but fortunately the effort is usually unsuccessful.

Lapid for his part thanked Macron for his personal “support and friendship over the years” and for his “firm stance” against antisemitism in France and around the world.

After a flowery speech filled with compliments for France, Lapid noted the country is one of the E3 nations leading the negotiations with Iran to revive the 2015 JCPOA nuclear deal.

“We may have disagreements about the content of the agreement, but we do not disagree on the facts. The facts are that Iran is violating the agreement and continues to develop its nuclear program,” Lapid said.

“Iran is hiding information from the world, it is enriching uranium beyond the level it is allowed to, and it has removed cameras from its nuclear sites.

“Given all this, the world must respond…The current situation cannot continue as it is,” he said, warning it will lead to a nuclear arms race in the Middle East, “which would threaten world peace.

“We must all work together to stop that from happening,” he warned.

“Any place that terrorism is found, Iran is never far away.”

Lapid pointed out the recent incident in which the Turkish government exposed Iranian cells that were planning to murder innocent Israeli tourists in Istanbul.

He added that just a few days ago, Iranian-made UAVs tried to attack an Israeli gas rig near the Lebanese coast.

“These UAVs were sent by Hezbollah, a terrorist organization that threatens Lebanon’s stability, violates its sovereignty, pushes it towards a dangerous escalation with Israel, and harms the national interests of Lebanon — a country I know is dear to your heart,” Lapid noted.

“Hezbollah has more than one hundred thousand rockets in Lebanon, aimed at Israel,” he said. “It tries to attack us with Iranian rockets and UAVs.

“Israel will not sit back and do nothing, given these repeated attacks,” he warned.

Lapid and Macron met privately after the briefing and were expected to follow up with an expanded meeting that included the staffs of both men. 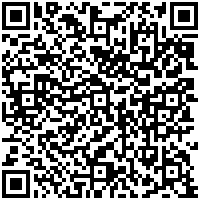