North West London Jewish Day School has e-mailed parents, cautioning them to stay indoors and avoid contact with others if they traveled to Lombardy, Italy, during the recent half-term vacation – even if they have no flu-like symptoms.

Those who had been to less infected areas in Italy should stay away from school if they are experiencing symptoms, the school said.

A right-wing think tank has criticized Ofsted for showing “less flexibility than is established by Departmental policies” on the age at which LGBT issues should be taught in school.

The Department for Education maintains that LGBT matters need not be taught in primary schools, but Ofsted has recently marked down Jewish primary schools for not including instruction on them.

The report, “The Watchmen Revisited,” by the Policy Exchange states that “all 21 Haredi schools inspected under the new framework have failed their inspections, despite most of them having been passed under the previous framework.”

Rabbi David Meyer of the Partnership for Jewish Schools said, “Over the past few months, Ofsted has targeted certain schools within our community and…penalized them based on a misinterpretation of the DfE’s guidance to primary schools.”

A man who was expelled from the Labour Party for anti-Semitic behavior, has been charged by the Crown Prosecution Service for sending a grossly offensive message.

Mohson Rasool, 60, of Birmingham was reported to have compared Jews to cancer on Facebook and to have advocated sending them into the Red Sea rather than using expensive gas on them.

He is also reported to have said that hatred of Jews is in his DNA.

A man who called a Jewish family “dirty Jews” three times after he bumped into their baby buggy outside a Costa coffee shop in St. Albans last summer has been found guilty of racially aggravated assault.

A video of his comments had gone viral.

The Union of Orthodox Synagogues has welcomed Health Department regulations on the new opt-out system for organ donation, which comes into effect on May 20.

According to the regulations, family members will be consulted and a person’s religious beliefs will be taken into account before an organ donation goes ahead.

Shlome Sinitski of the Union told the Jewish Chronicle, “Organ donation is a sensitive matter and we are reassured that the religious and cultural needs of the charedi community are taken into account. We encourage families to have discussions on this matter and to consider recording their views on the Organ Donation Register.”

The Union advised people to opt out of organ donation, but said saving a life overrides the halachic necessity to bury a body intact and that donating an organ, therefore, would sometimes be permitted.

Last year, the Dayan Yisroel Lichtenstein of the Federation of Synagogues said, “It is a Torah obligation to opt out.”

Manchester medical ethics expert Rabbi Dr. Jonathan Lieberman told The Jewish Press that the organ donation debate centers around the definition of death, “There is a disagreement among the rabbis as to whether brain death is halachic death. Some say it is, and therefore donation of organs to save a life from a brain-dead patient with a beating heart would be permitted.

“Others disagree and say halachic death is only when there is cardio-respiratory cessation and therefore would only allow donation from people who had died in the old-fashioned conventional sense of the heart stopped and no spontaneous respiration.”

The favorite in the race for Black, Asian, Minority Ethnic representative on Labour’s National Executive Committee was suspended from the party for allegedly acting in an anti-Semitic manner.

Mehmood Mirza was reported to have posted on Facebook an Iranian cartoon of a man with a headband, labeled “free Palestine” with a sticker with the word “anti-Semitism” over his mouth. 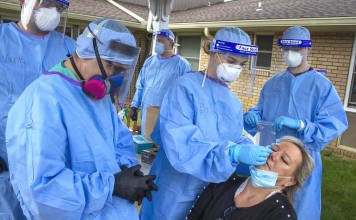