Israel’s Ambassador to the United Nations Gilad Erdan told a meeting of the United Against a Nuclear Iran organization on Wednesday in New York that sanctions alone will not be enough to stop the Islamic Republic from a nuclear breakout.

Speaking on the sidelines of the UN General Assembly, Erdan said economic sanctions against “a cruel regime such as the Iranian regime” will not be effective.


Iranian President Ebrahim Raisi’s said in his speech to the UNGA delegates that his country has built economic relations with other states – and these connections will enable the Islamic Republic to neutralize the impact of sanctions.

“The conclusion must be that the only way to stop Iran from going nuclear is to use a combination of diplomatic isolation, crippling sanctions and – most important of all – a credible military threat,” Erdan warned.

“As Raisi said, sanctions alone will not help. A credible military threat will be the deciding factor. We must force the regime of the Ayatollahs to choose between their dangerous nuclear program and remaining in power,” he added.

“Israel will not sit with arms folded when our future security is endangered…[and] will not be obligated by any international agreement that endangers our existence. We will not hesitate to protect ourselves and all options will remain on the table. Iran will never have the bomb.”

Erdan left the UN General Assembly during Raisi’s speech to protest the Iranian president’s denial of the Holocaust.

At the beginning of Raisi’s address, Erdan placed a picture of his grandmothers, survivors of the Auschwitz concentration camp who both lost family members during the Holocaust, next to Israel’s sign on its table in the General Assembly Hall.

“The UN has descended to a new moral low today,” Erdan said in a statement sent to reporters.

“While in Iran the Ayatollah regime oppresses its citizens, murders women who do not cover their heads, and finances terror attacks around the world, here at the United Nations, which was established to prevent such atrocities, the president of Iran, the murderer and Holocaust denier Raisi, gets a platform to spread his hatred.

“It’s a disgrace. . . I showed Iran’s president a picture of my late grandmothers so he could see ‘a few more signs’ that the Holocaust happened and tell him that we will never allow the horrors that happened to us to happen again.” 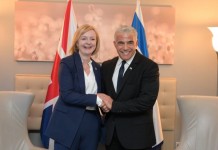 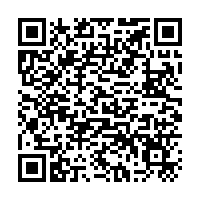