On Sunday around 7:00 AM, a group of five workers in the cowshed of Kibbutz Yagur was drinking their morning coffee together when one of them suffered a sudden cardiac arrest and collapsed unconscious. One of the men started to perform chest compressions, and the others called emergency services for help.

Haim Gitter lives in Kibbutz Yagur and works in developing the local agriculture. He, too, was into his morning office when he was alerted to the emergency nearby. “I ran so fast I thought I was flying, and within a minute, I arrived at the cowshed,” he recalled.


Haim works closely with the entire agriculture staff, and the person in need is his friend. “It made the situation even more stressful, but I feel privileged that I was able to help him and glad it ended happily,” Haim said.

The EMT replaced the man who was performing CPR. “It was a good thing that someone started compressions immediately, even though he didn’t have the best form because keeping the heart pumping is essential under these circumstances,” he commented.

The others were eager to help, so Haim asked them to take out the defibrillator he had brought with him and they sprung to action. They took out the stickers and applied them to the patient’s chest. The defibrillator advised a shock almost immediately. Haim distanced the group and a shock was administered. He crouched back down and continued CPR.

Within the next minute, the man’s pulse returned and he started to breathe. A few minutes later, an intensive care ambulance arrived at the scene.

As the paramedic approached, the patient started to move his arms and legs and even opened his eyes. Haim explained, “When he regained consciousness, he asked me in great confusion, ‘Haim, what are you doing here?’ I told him that I came to help and asked if he remembered what had happened. He had no clue and said he was just having coffee with the guys. It took me by surprise that he regained full consciousness at the scene, it’s incredibly rare after a person suffers a cardiac arrest and has to receive CPR.”

The patient’s wife called Haim from the hospital to say a heartfelt thank you. The doctors and nurses there chimed in to thank him as well and showered him with gratitude for arriving on the scene so quickly, which was why the patient’s life had been spared.

“It was a real miracle,” Haim said. “I’m so emotional thinking about how crazy it was. I even remember the first thought that crossed my mind when my friend was riding away in the ambulance. It was how taking the course and becoming an EMT was worth it just for being able to save him. We are so often responding to emergencies when we are unsuccessful and it can sometimes feel like we are wasting time being EMTs. But then something like this happens and it changes our whole perspective. It makes all the other times worth it when we succeed in saving just one person, especially if it’s someone we know and love from our community.” 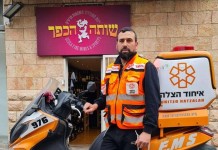