Israeli military forces eliminated 22 terrorists and wounded 69 others within the past 36 hours — since the start of the conflict with the Iranian-backed Palestinian Islamic Jihad (PIJ) terror group in Gaza.

More than 350 rockets, missiles and mortars have been launched at Israeli territory from Gaza since Tuesday morning.


Coordinator of Government Activities in the Territories (COGAT) Maj.-Gen. Kamil Abu Rukun, announced Tuesday (12 November) that the Erez and Kerem Shalom Crossings are closed until further notice, and the fishing zone in Gaza is to be scaled back as well.

“We are continuing to strike Islamic Jihad after having targeted its senior commander in the Gaza Strip,” Prime Minister Benjamin Netanyahu said at the start of a cabinet meeting on Wednesday morning.

Baha Abu al-Ata, he said, “was responsible for most of the terrorist attacks originating in the Gaza Strip in the past year and he had been planning to carry out additional attacks in the days to come.”

Netanyahu commended the IDF, ISA, IDF Intelligence, the Air Force and IDF Southern Command for their “successful operation, which is creating a new standard for targeting murderers and terrorists in the world.”

He also praised the Iron Dome soldiers, who he said “are also creating a new standard, because their action in successfully intercepting over 90 percent of these launches. This is exceptional work by our soldiers and commanders. I salute you.”

Since Tuesday, Netanyahu said the IDF destroyed important Islamic Jihad targets, including terrorist cells that planned to launch rockets at the territory of the State of Israel, several of which were caught in the act.

“I said yesterday that we are not bent on escalation, but that we would respond to every attack against us, and respond very sharply.

“We are determined to fight to defend our country and if they think that these barrages or these strikes will weaken us or lessen our determination, they are mistaken. Therefore, they have but one choice – to stop these attacks or take more and more blows. The choice is theirs.

“Citizens of Israel, I reiterate that this could take time. IDF Home Front Command instructions must be followed carefully. I will also add that we see a very high likelihood that those who follow these instructions will not be hurt,” he emphasized.

“When there are casualties, in almost all cases, they are people who did not listen to IDF Home Front Command. These instructions are simple and clear and I ask that you all follow them. 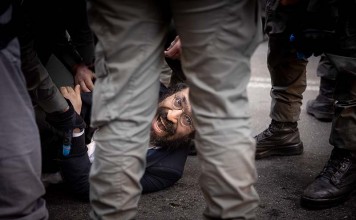