The Balad party (which is part of the Joint Arab list in the Knesset) held a rally in Nazareth against the agreement between Israel and the United Arab Emirates (UAE), this past weekend.

Member of Knesset (MK) Heba Yazbak was harsh in her criticism of normalization between Israel and the UAE. Yazbak accused Israel of “trafficking in Palestinians’ rights to sovereign and independence, the return of refugees to an independent country, and even lifting the siege on Gaza.”


During the rally, former MK and former Balad party leader Jamal Zahalka attacked Israel and the peace agreement, declaring, “Countries that impose themselves on their people by force will disappear, and with them their shameful normalization agreements.” Referring to the president of the UAE, Zahalka also told the crowd, “If Bin Zayed surrendered and raised the white flag, we will raise the flag of Palestine.”

The initiative promoted by MK Yazbak asserts that “Palestinians” have a legitimate right to oppose the Deal of the Century and that their opposition to it should resemble Irish, Indian, and South Africans’ struggles against colonialism, by imposing boycott, divestment, and sanctions, and other legitimate methods of struggle. 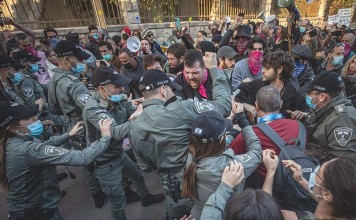 Netanyahu’s Office Reveals Blockade Near Residence Was Breached by Protesters, PM Was Whisked to Safety