An Israeli-Arab who tried to lynch a Jew from Acre (Acco) during the 2021 Gaza conflict was sentenced to 10 years in prison on Monday.

Haifa District Court judges found Adham Bashir guilty of aggravated assault with aggravated intent and rioting, all with a nationalist-ideological motive. The 25-year-old Bashir was also ordered to pay 150,000 shekels (over $43,000) in damages.

Arab riots broke out in several mixed Jewish-Arab cities — including Lod, Jaffa and Ramla during Israel’s two-week conflict with the Hamas terror organization.

Bashir threw stones at Mor Janashvili, a 30-year-old resident of Acre. While fleeing from Bashir, Janashvili crashed his car and was attacked by five other Arabs with knives, rocks and sticks.

Janashvili’s life was saved by an Arab nurse, Fadi Qasem, who shielded him with his body and drove him to the Galilee Medical Center.

The trials of five other defendants are still ongoing. 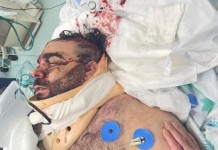