Arch-Terrorist Marwan Barghouti has initiated a mass hunger strike with some 1000+ fellow terrorists sitting in Israeli jails. There are approximately 6000 Palestinian Authority Arabs in Israeli jails.

The terrorists are demanding better conditions, additional visitations from relatives (cancelled by the Red Cross due to budgetary costs), no more solitary confinement and the release of 500 administrative detainees.


They also want even better medical treatment than they’re getting, more TV channels, chronically sick terrorists be freed from jail and prisoner access to the cellphones in the security wings.

Khaled Abu-Toameh points out that there are 12,494 “Palestinians” in Syrian jails. You can bet they wish they got the same treatment as the terrorists in Israeli prison.

Barghouti was arrested in 2002, and is serving 5 life sentences plus 40 years for his role in multiple terror attacks, including sending out suicide bombers.

On Sunday,  the NY Times published an op-ed by Barghouti, though unsurprisingly, the NY Times left out all mention in the bio as to why Barghouti is actually sitting in jail, merely describing him as a “Palestinian leader and parliamentarian”.

There is no mention that Barghouti was convicted of five counts of murder and one attempted murder after being given a fair trial, and that he was the commander of the Al-Aqsa Martyrs Brigades during the Second Intifada.

Update: Following the public outcry, the NY Times added an addendum to the bottom of the op-ed:

Editors’ Note: April 17, 2017
This article explained the writer’s prison sentence but neglected to provide sufficient context by stating the offenses of which he was convicted. They were five counts of murder and membership in a terrorist organization. Mr. Barghouti declined to offer a defense at his trial and refused to recognize the Israeli court’s jurisdiction and legitimacy.

Barghouti doesn’t have a very good track record when it comes to hunger strikes, he is much better at sending other people to do his dirty work.

On August 17, 2004, Israel’s Prison Services released a video showing Marwan Barghouti secretly eating in his prison cell while his fellow prisoners were on a hunger strike.

At the time, Prison Services spokesman Ofer Lefler said, “I want to show the world and the Palestinians that we are dealing with terrorists… Barghouti is sitting on a pot of meat and he sends his friends to die.”

This time Barghouti will probably look for the hidden camera first. 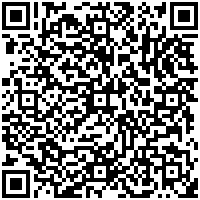