A paraglider was injured after he crashed into a cliff face near Ben Ami Boulevard in Netanya, United Hatzalah reported Wednesday afternoon.

United Hatzalah volunteer EMT Naftali David who was one of the first responders at the scene reported: “When I arrived at the scene, I found a paraglider had crashed into a cliff face. According to passersby he had crashed after having a complication with his paraglider. At this time he is fully conscious and firefighters are working to extricate him from paraglider and bring him to safety. United Hatzalah EMS personnel are standing by to assist him the moment he is brought off the cliff face.”


The website Israel with Style promotes the paragliding sport in a way that could explain Wednesday’s crash (Paragliding Netanya Beach, Israel):

Stand on the cliffs overlooking the beach, strap yourself up and off you go for a scenic Paragliding ride over the Netanya beach. No prior experience is necessary as you fly tandem with a professional. Enjoy a beautiful view of the Netanya coast and promenade as you marvel at the waves crashing on the beach below you. Under the supervision of your instructor you may take the controls and experience the sensation of flying a paraglider yourself!

Paragliding in Netanya is from ages 6 and up. Paragliding is dome mostly between May and October from around 12:30 until 4:30 PM weather dependent.

What’s the worst that could happen? 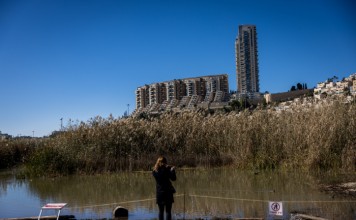