The judge went out of his way to chastise both officials for imposing a far more restrictive lockdown regime on religious gatherings than on virtually identical activity engaged in by thousands of people demonstrating in the Black Lives Matter protests. And to boot, he found their discriminatory conduct violated the First Amendment because there was no compelling reason for it.


But the judge was not able to wipe away the false image De Blasio and Cuomo publicly painted of selfish and insulated Jews intent on slavish adherence to curious rituals, the public be damned.

For his part, Cuomo likened funerals to participatory sports: “Now is not the time to be playing Frisbee with your friends in the park,” he said. “Now is not the time to go to a funeral with 200 people…. I understand grieving and I understand how the religious services can help with the grieving process. But as a society, the risk is too great…. It’s not about your life. You don’t have the right to risk someone else’s life. ”

So he promptly announced he was raising the maximum potential fine for not standing sufficiently apart from other people to $1,000 (it was previously $500).

In his order, Judge Sharpe analyzed the differing treatments meted out to religious gatherings and racial-justice protests and found them to unconstitutionally disfavor religion in violation of the First Amendment. He thereupon prohibited the mayor and the governor “from enforcing any indoor gathering limitations” on religious entities “greater than imposed on non-religious ones“ and ”from enforcing any limitation for outdoor gatherings provided the participants in such gatherings follow social distancing requirements.”

So Judge Sharpe was able to set things straight as a practical matter, but the belittling statements of the mayor and governor about of our religious ritual remain as insults and threats to our community. We are grateful that none of the many lunatics out there have yet seized upon their message that Orthodox Jews practicing their religion endanger others. We rather thought Bill De Blasio and Andrew Cuomo knew better.

At all events, we now await Judge Sharpe’s ruling in another case brought in his court by the Association of Jewish Camp Operators and several individuals over Governor Cuomo’s several executive orders restricting gatherings of individuals out of a supposed concern for the spread of Covid-19. These executive orders have resulted in a statewide ban on all overnight Jewish camps this summer.

Avi Schick, the attorney for the plaintiffs, has argued that the governor’s action infringes on parents’ constitutional right of the free exercise of religion to direct the religious upbringing of their children.

He also notes that the governor has not only exempted the racial-justice mass protests from the executive orders but has also arbitrarily exempted entities comparable in operation to overnight camps if they follow certain NYS Department of Health guidelines while refusing to allow the Jewish overnight camps to operate even if they follow even more protective protocols.

A ruling from Judge Sharpe is expected shortly. 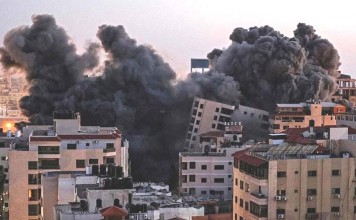