A small, folded 3,200-year-old lead tablet that was unveiled on Thursday may shed new light on Biblical study as we know it. The tablet, which was discovered on Mount Ebal in Samaria, known as the biblical “Curse Mountain,” includes the explicit name of God and the text of a curse, both in the ancient Hebrew script.

Mount Ebal is one of the two mountains near the city of Shechem in Samaria and forms the northern side of the valley in which the city is situated. Shechem’s southern side is bordered by Mount Gerizim. The event at Mount Gerizim and Mount Ebal or the event of blessing and cursing occurred near the entry of the people of Israel into the Land of Israel at the beginning of the settlement period, after the forty years of wandering in the desert. The commandment to hold the event appears in the book of Deuteronomy and the report on how it was carried out appears in the book of Joshua.


The event included the construction of an altar on Mount Ebal and the offering of Olah and Shlamim sacrifices on it; writing parts of the Torah on stones: the blessing of the Levites on the keepers of the commandments of God and their curse on the transgressors; and at the end of the event, Joshua bin Nun recited to the people the blessings and curses written in the parsha of Ki Tavo.

The small lead tablet that was discovered on Mount Ebal was dated to the 13th century BCE, bears this curse (transliterated, Arur means cursed, and Ye’ho is part of the explicit name of God):

Prof. Gershon Galil from the University of Haifa calls the discovery an “earthquake in Biblical studies,” since “the new find unearthed today is the earliest Hebrew inscription found so far.” Before the latest discovery, the oldest inscription in Hebrew was dated to the tenth century BCE. “It was an inscription found at the Kiafa ruin, near the Ella Valley, by Prof. Yossi Garfinkel from the Hebrew University, which I deciphered,” he says.

But wait, there’s more: “The new finding is a death blow to all biblical deniers,” Prof. Galil stresses. “Many Bible critics have claimed that in the 13th century BCE (the traditional Jewish timeline places the exodus at 1248 BCE – DI), the people of Israel did not read and write, and therefore could not have written the Bible. This is why Bible critics have claimed the Bible was written very late, in the Persian or Hellenistic period (fourth and thirds centuries BCE – DI).

According to Prof. Galil, the tablet’s text represents great proficiency: “Anyone who knows how to write a text with a chiastic pattern can write anything,” he says.

A chiastic pattern or structure is a literary technique in narrative motifs and other textual passages, with at least two ideas that are intertwined.

“At this point, unfortunately, it is not yet possible to reveal all the information that has been unveiled, as it is awaiting peer review and academic publication,” Prof. Galil says. But we should say She’hechyanu over finding the explicit name of God in Hebrew.”

The correlation between the 3,200-year-old lead tablet and the event described in Deuteronomy 27 is obvious:

Thereupon Moses charged the people, saying: After you have crossed the Jordan, the following shall stand on Mount Gerizim when the blessing for the people is spoken: Simeon, Levi, Judah, Issachar, Joseph, and Benjamin. And for the curse, the following shall stand on Mount Ebal: Reuben, Gad, Asher, Zebulun, Dan, and Naphtali. The Levites shall then proclaim in a loud voice to all the people of Israel: Cursed be any party who makes a sculptured or molten image, abhorred by Hashem, a craftsman’s handiwork, and sets it up in secret. — And all the people shall respond, Amen.

The text proceeds with a list of “cursed be,” or “Arur,” as in our lead tablet. Which Prof. Galil believes makes the fact that it was discovered on the very mountain where the ceremony of reading the curses took place yet another proof of its authenticity.

“These are not curses per se,” Prof. Galil stresses. Rather, “the meaning of the expression ‘cursed’ is ‘would be cursed.’ It is a legal text that warns that whoever does not keep the commandment would be cursed. In the relationship between Israel and God, there is an informal relationship in which God declares that He loves the people, and there is also a formal and legal component. In other nations as well, in every contract, there are blessings as well as curses that would apply to whoever breaks the agreement.” 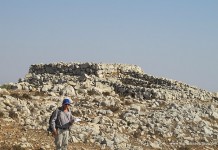 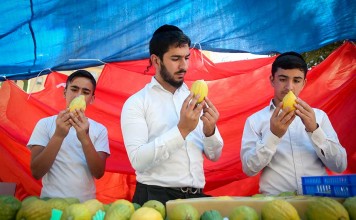 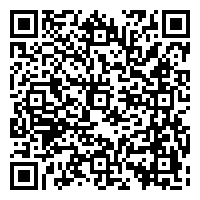