The State of Israel has always had a special place in Yisrael Helprin’s heart. He and the state were born on the same day, May 14, 1948, and have celebrated every birthday together since. It was incredibly important to Yisrael to make his lifelong dream of becoming an Israel citizen a reality before he, and the State, had turned 70.

Yisrael grew up in New York, in a Zionist household, where his family would sing Israeli songs together, visit Israel as often as they could, and sent their children to Hebrew speaking summer camps. In fact, before Yisrael was born, his parents planned on naming him after his two grandfathers who had passed on – but once they realized his birth coincided with the declaration of the State of Israel, things changed. His parents decided it was vitally important to commemorate the miraculous birth of the Jewish State along with the birth of their son, and named him Yisrael.


“I could not think of a more special day to make Aliyah than Israel’s 70th Independence Day.” said Yisrael Helprin, adding, “The State of Israel and I have had a strong connection since the day I was born and every year since we have celebrated our birthdays together.”

“But this year will be the culmination of a lifetime’s journey, becoming an Israeli citizen at the same time the State of Israel and I celebrate our birthdays. I couldn’t ask for a better birthday present,” he said.

On Tuesday, Yisrael and his wife Bella moved from Monsey, NY, to Ramat Beit Shemesh, to join their daughter and her family. Having visited the city numerous times, they already feel as if they are part of the community. The couple’s four other children live in the US with their families, and while it was not an easy decision to move away from them, the Helprins have been planning this move for some time.

On their first date, 45 years ago, the main topic of conversation for Yisrael and Bella, was the importance of the State of Israel in their lives, and how much they would both like to live there one day.

“The State of Israel was founded by dreamers and visionaries,” said Rabbi Yehoshua Fass, Co-Founder and Executive Director of Nefesh B’Nefesh. “Yisrael set himself a goal of making Aliyah, and we are grateful that we have had the privilege of helping him realize that dream, just in time for the momentous birthday he shares with our State.”

Trump on Israel’s 70th Anniversary: US Has ‘No Better Friend Anywhere’ 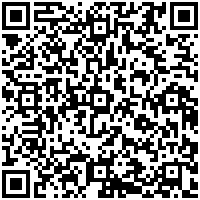