Madonna this week ended the uncertainty over whether she would cave to the Boycott, Divest and Sanctions campaign against Israel, signing a contract Thursday to perform at the 2019 Eurovision Song Contest finals in Tel Aviv this weekend.

Israel’s Kan public broadcasting network wrote, “Now it’s official” on its website. “After some tense days, a contract between Madonna and the Eurovision producers was signed today.” The star is to perform in the interval during the Eurovision finals.

Kan is producing the event with the European Broadcasting Union (EBU). The vocalist is accompanied by an entourage of 135 people, including rapper KoVu, 40 backup singers, 25 backup dancers and a team of technical people, according to reports quoting Sylvan Adams, the Israeli Canadian billionaire allegedly sponsoring her performance.

Madonna had said earlier in the week in a statement carried by U.S. media, “I’ll never stop playing music to suit someone’s political agenda nor will I stop speaking out against violations of human rights wherever in the world they may be.”

Eurovision Mega-Festival Fizzed Out, But We Hear Great Things about Lag B’Omer 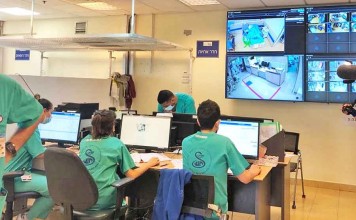