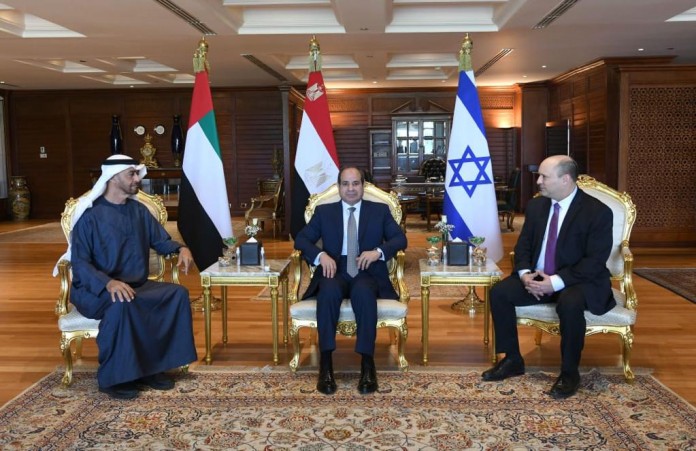 Israeli Prime Minister Naftali Bennett made a surprise visit to Egypt on Monday.

The prime minister is meeting with Egyptian President Abdel Fattah al-Sisi. The trip was not announced in advance, nor are there any details about the agenda for the talks.

According to a report by Walla! News Hebrew-language journalist Barak Ravid quoting a “senior Israeli official”, Bennett will hold a tripartite summit in Sharm el-Sheikh with al-Sisi and the Crown Prince of Abu Dhabi, Prince Muhammad bin Zayed.

A new direct flight route between Tel Aviv’s Ben Gurion International Airport and Sharm el-Sheikh is scheduled to start during Chol Hamoed, the intermediate days of Pesach, according to an announcement last week by the Prime Minister’s Office.

The route was discussed at the meeting between Bennett and al-Sisi in Sharm el-Sheikh.

The new agreement was formulated by Israel and Egypt over the last few days and was finalized last week in Egypt by an Israeli delegation led by the Israeli Security Agency (ISA), following a long process carried out with the National Security Council and additional officials, together with the Egyptian government, the Prime Minister’s Office said.

“This agreement will further warm the relations between Israel and Egypt,” Bennett said in a statement announcing the new route.

“The cooperation between our two countries is expanding in many fields, and this is contributing to both peoples and to regional stability. Israel is opening up to the countries of the region and the basis for this long-standing recognition is the peace between Israel and Egypt.

“Therefore, on both sides we need to invest in strengthening this connection – and that’s what we are doing. I thank the Israeli Security Agency for taking the lead on formulating the security outline that will enable this route to open,” he added.