Al-Alawi, who was received with an honor guard at Palmachim Air Force Bose, is in Israel as a guest of Israeli Air Force Commander Major-General Amikam Norkin.

The Commander of the UAE Air Force, Maj. Gen. Ibrahim Nasser Mohammed Al Alawi is visiting Israel, for the #BlueFlag Intl airforce exercise.
The commander was welcomed at Palmachim Air Force Base by an honor guard led by his counterpart Maj. Gen. Amikam Norkin. #AbrahamAccords pic.twitter.com/hYF2dTRXkA

Blue Flag, which this year includes military air personnel from the United States, France, Germany, Greece, Britain, India and Italy, is described by the IAE as “Israel’s largest and most advanced aerial exercise ever.”

Each nation sent six fighter jets, transport planes and full ground crews to participate in the exercise, which involves more than 1,500 soldiers.

At the same time, 11 countries operating the F35 stealth fighter jet are currently meeting in Israel as well. The UAE, a founding signatory to the Abraham Accords, is expected to also receive the advanced fighter jet.

“The Middle East is a complex arena, changing at any given time,” Norkin said Monday in a statement. “The challenges we face are growing, so we must be one step ahead of the enemy.

“The threat to Israel comes from various sectors – from the Gaza Strip to Syria and from Lebanon to Iran. The joint training allows us to learn from the air forces participating in the [Blue Flag] exercise and prepares Air Force personnel for real-time scenarios to continue to succeed in our mission: protecting Israel’s security.”

Israel’s Air Force is now in the process of changing its training program – which has not been updated since 2016 – as part of preparations for a possible attack on Iran.

The IAF says it has placed the plan to attack Iran’s nuclear facilities at the top of its list of priorities, according to KAN News. 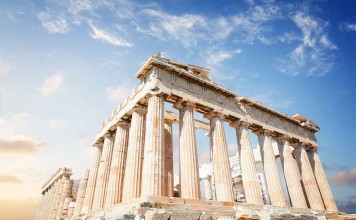 Re-Examining Our Ideological Battle Against the Greeks