“In the warm meeting, held at the King’s invitation, President Herzog and King Abdullah discussed deep strategic issues, at both the bilateral and regional levels,” Herzog spokesperson Eylon Levy wrote.


Following the meeting, Herzog talked about his “immense respect” for Abdullah, who he called a “great leader and a highly significant regional actor, who has recently met extremely important leaders, including President Biden, President Putin, President al-Sisi, and Mahmoud Abbas.”

The two men discussed “core issues” which included the agreement reached between the Agriculture Ministers of Israel and Jordan to import agricultural produce during the shemittah (agricultural sabbatical) year, as well as “energy issues, sustainability, and solutions to the climate crisis that we can advance together,” Herzog said.

“There is a sense in the region of a desire to make progress, a desire to speak,” he added.

“We are currently marking one year since the signing of the Abraham Accords. These accords created an important regional infrastructure. They are highly important agreements, which are transforming our region and the dialogue within it.

“I speak with many leaders from all around the world, almost every day, in full coordination with the Government of Israel,” Herzog noted. “I think that it is very important for the State of Israel’s strategic and diplomatic interests to engage everyone in dialogue.” 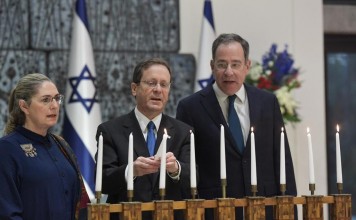