Ambassador Michael Oren has been on the move lately, visiting college campuses and communities in California, Michigan, Chicago, and Boston.

Israel Campus Beat caught up with him last week at the George Washington University in Washington, DC, after he addressed a crowd of students and community members.

The New Jersey native, who earned degrees from Princeton and Columbia and has served in faculty positions at Harvard, Yale, Georgetown, the Hebrew University, and Tel Aviv University, has served as Israel’s ambassador to the United States in May 2009. As the author of two best-selling books and a former contributing editor of The New Republic and the Shalem Center’s quarterly journal, Azure, Oren has a long history in academics and prose, and a profound ability to connect with his audience.

During a private reception last week at GW’s Elliot School of International Affairs, he offered advice to pro-Israel student activists and advocates.

“You need to know your subject, back and forth,” he said. “There is no substitute for knowing the history and knowing the current affairs.”

There is no substitute for experience, he added, even those that are difficult.

“Getting the stuffing knocked out of you sometimes is a very educational experience and I’ve been through it all,” he said. “Today, I get to a point where it is very, very rare where I will get a question, even a very difficult question that I haven’t received many times before. Being able to have the information at your fingertips is indispensable.”

He stressed the importance of treating every question with respect, noting that there is only one question that he refuses to respect.

“I won’t respect any question that draws a comparison between Israel and the Nazis,” he said. “I won’t respond to that, at least not respectfully.”

Oren demonstrated his knack for staying calm when a dozen George Washington University students left his event, minutes in, carrying signs that said “Oren Supports Colonialism.” Oren stood at the podium and urged those leaving to stay and hear what he had to say.

The title of Oren’s presentation at GW was “Ultimate Allies: Israel and the United States,” and he discussed the strong connection between the two countries.

“We agree on the end game. We agree on the strategy. Strategy is creation of two states for two peoples, the nation state of the Jewish people called Israel, the nation state of the Palestinian people called Palestine living side by side in mutual security and mutual recognition and peace. Those are our common goals,” he said, explaining that although Israel and the U.S. sometimes disagree on certain tactical subjects, both countries are determined to prevent a nuclear capable Iran. 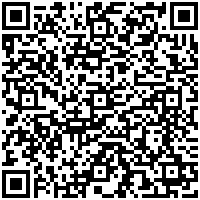