On the occasion of the ministerial exchange ceremony between incoming National Security Minister Itamar Ben Gvir and outgoing Internal Security Minister Omer Barlev, Minister Ben Gvir said, “Let it be clear to anyone who wants to launch terror attacks, that he will discover that our security forces are powerful and focused and know how to protect themselves, and let it be clear that each member of the security forces who defends his life will receive full backing for it.”

The ceremony was attended by many dignitaries, including Police Commissioner Yaakov Shabtai, Prisons Commissioner Katy Perry, and the head of the Witnesses Protection program Avi Neuman.

Ben Gvir stressed: “I must use this forum to tell you – policemen, soldiers, and everyone who fights terrorism: any terrorist who wants to harm you – his blood on his head, and I will give you all the backing in this war. This backing is not only for you but for all our children and families who deserve to walk around safely.”

At which point the departing minister turned on his successor, saying, “And for or because of this statement, the citizens of this country threaten to harm a government minister? How far have we gone? How far have we deteriorated as a society? How far will we continue to deteriorate? A crime is a crime is a crime, a criminal is a criminal is a criminal, and it doesn’t matter if he is Jewish or Arab, Israeli or Palestinian, a resident of Israel or a foreigner. Remember this: the mission of the Israel Police is to continue to act when only the laws of the country are the light at its feet to guide it.”

Ben Gvir responded, telling Barlev: “Come talk to my wife Ayala and my children, and you will find out that almost every week we receive pictures of bloody knives and calls to murder me, time after time – not only from the enemies of Israel but also from anarchist Jews that the time has come to deal with them. Every day there are hundreds of incidents of stone-throwing at the residents of Judea and Samaria, in Jerusalem, the Negev, and the Galilee, at Jews because they are Jews.”

We agree, Minister Ben Gvir. Let them have it. 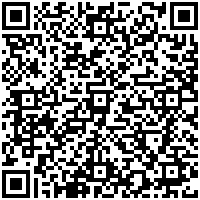