Following the biggest failure in its history in the April 19 Knesset elections which morphed it downward from 24 to 6 seats, the Labor party on Tuesday chose MK Amir Peretz to replace former chairman Avi Gabai, who might as well have been a Likud saboteur for the damage he inflicted on the party Ben Gurion built.

Peretz, the former mayor of rocket-plagued Sderot in the Negev, former chairman of the Histadrut central labor union, and the guy who defeated Shimon Peres to become Labor chairman in 1995, won 47% of the party’s primary vote, or 13,559 votes.


Peretz defeated fellow MKs Itzik Shmuli and Stav Shafir, who each gained 26% of the votes.

The turnout Tuesday was abysmal: only 45.6% of the members bothered to show up (that’s 29,774 voters) – compared with the average of 60% in recent primaries. Peretz benefited from the low turnout, because he is close to the trade unions which are skilled in vote packaging, while the other two candidates had to work à la carte.

Amir Peretz’s political credentials are even more volatile than those of his former one-time partner, Tzipi Livni. We picked them yp from Wikipedia:

Peretz is credited with the Iron Dome project, which some find to be morally reprehensible, seeing as it stops the most catastrophic rocket attacks against Israeli civilians, thus helping to maintain a stalemate during which Israel’s government is not urged by a critical majority to go after the terrorists inside the Gaza Strip in a manner that ends their existence once and for all. Only the few thousand Israelis near the Gaza border are complaining, but their voices are only heard after a rocket lands near Tel Aviv.

One good thing from last night: the vote results were tabulated and announced in a matter of seconds. 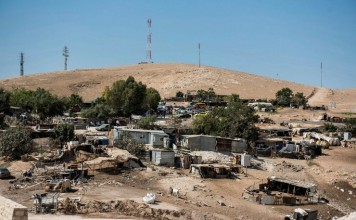