After counting 328 polling stations out of 587, about 58% of Likud members voted on Tuesday, and after counting 60% of those votes, it appears to be crowded at the top. At this point (8 AM, Wednesday), Transport Minister Yisrael Katz is in first place, followed immediately by Knesset Speaker Yuli Edelstein.

Former minister Gideon Sa’ar, whom Netanyahu has targeted for personal attacks over the PM’s suspicions of his plans to grab Presdet Rivlin’s appointment to cobble a coalition government, came in third. Netanyahu said on Tuesday that he didn’t mind Sa’ar coming in second or below, as long as he didn’t win first place.

The real results are expected later on Wednesday morning (Israeli elections are conducted with paper ballots).

Here is the list of Likud candidates for the Knesset, as of Wednesday morning: 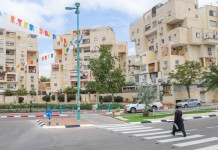 In Elad: No Mask, No Synagogue Privileges