A Canaanite fortress from the middle of the 12th century BCE (the days of the biblical judges), was unearthed in an excavation of the Israel Antiquities Authority and volunteer youths near Kibbutz Galon outside Kiryat Gat,some 50 miles south of Tel Aviv.

The size of the fortress is 60 × 60 ft. and it includes towers at the four corners. A huge threshold was preserved at the entrance to the structure, hewn from a single stone weighing about 3 tons.


Inside the citadel was a courtyard paved with stone slabs which had pillars in the center. Rooms were arranged on either side of the courtyard. Hundreds of pottery vessels, some of them intact, including special vessels such as a bowl and a cup, which were probably used for worship, and a large number of bowls, were exposed in the fort’s rooms. Some of the bowls were made in a style that imitated Egyptian bowls.

The remains of the citadel were uncovered with the help of students from the Eretz Israel Dept. at the multidisciplinary school in Beer Sheva, students from the Nachshon pre-military preparatory school, and many volunteers. This is part of the Antiquities Authority’s policy to bring the general public, in particular the younger generation, closer to the archeology of their homeland.

According to archaeologists Saar Ganor and Itamar Weisbain of the IAA, “the fortress we discovered provides a glimpse into the geopolitical reality described in the Book of Judges, in which the Canaanites, the Israelites and the Philistines struggle against one another. During this time, the land of Canaan was ruled by the Egyptians, and its inhabitants were their subjects. But then, during the 12th century BCE, two new major players appeared in the region: the Israelites and the Philistines, thus began a series of bloody territorial struggles.”

“The Israelites settled in unfortified communities on the central mountain ridge, while the Philistines gained great power in the southern coastal plain where they established large cities in Ashdod, Ashkelon, Ekron and Gat,” the two researchers continued. “In an attempt to occupy more territory, the Philistines confronted the Egyptians and the Canaanites on the border, which presumably stretched between the Philistine kingdom of Gat and the Canaanite kingdom of Lachish in Nahal Guvrin.”

Ganor Weisbein added that “the stories of the judges in the Bible clearly illustrate the complex geopolitical reality and the struggle for territorial control, during the realignment of the political forces in the Land of Israel. The layout of the citadel is known from other sites which were excavated in the country, and identified as Egyptian ‘governor’s houses.’ The fortress was built in a strategic location, from which it was possible to view the main road that passed along Nahal Guvrin – a road that connected the coastal plain to the Judaean plain.”

Talila Lifshitz, Director of the Community and Forest Department in the Southern Region of the Jewish National Fund said: “Gal-on Fortress provides a fascinating glimpse into the story of a relatively unknown period in the country’s history, and is a tourist and experiential attraction for visitors. The fortress is located in the Guvrin Forest and was prepared for access to the general public together with the southern district of ​​the Jewish National Fund. A parking lot and explanatory signs have been set up there to enhance the archeological experience in nature and in the forests.” 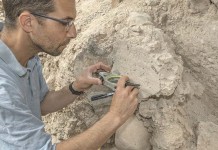