The attacking car was driven by a 39-year-old Bedouin from the town of Rahat who swerved on to the sidewalk at Kfir Square on Ilan Ramon Street.

A few days earlier, the driver threatened in a video post online that local Bedouin in Israel are “willing to give our lives” if the State of Israel doesn’t “properly respect us.”

Magen David Adom (MDA) medics Lior Paz and Ron-El Israeli said in a statement, “When we arrived, we saw the injured man lying on the ground fully conscious and suffering damage to his limbs. We were told that he had been hit by a vehicle that had gone up on the sidewalk. We gave him medical treatment that included dressings and immobilization and evacuated him to the hospital in moderate condition.”

United Hatzalah volunteer EMTs Shmuel Tweel and Zeevi Scheinein who were among the first responders at the scene reported: ” The injured person was a pedestrian who was stuck by a moving vehicle. We treated him at the scene of the incident after he had suffered severe injuries to his limbs as a result of being struck by the vehicle. After receiving initial treatment he was taken to Soroka Hospital for further treatment.”

The victim was listed in fair condition at Soroka Medical Center. A spokesperson for the hospital said the boy was transferred to an operating room upon arrival at the trauma room. “He suffers from limb injuries and his condition is moderate.”

A witness said the driver, who was arrested, first tried to flee the scene after hitting the student. He was arrested about 100 meters from the scene of the attack.

“I was working from home and heard a boom,” Liat Meir told Ynet. “I looked out and saw the student dragging himself to safety.

“I heard a female driver screaming. At first, I thought she hit him. The driver continued driving and police arrested him after that. He tried to run away.”

Police said the driver works as a truck driver and has no prior criminal record.

Negev regional police told Ynet that an initial investigation indicates the driver deliberately ran over the student, but it is not yet clear whether the incident was criminal or nationalist.

“At this stage we are not ruling out any direction,” said Deputy Commissioner Nachshon Nagler. “Police officers who were in the area as part of the increased security saw the incident and provided initial medical treatment” to the victim.

“We ask the public to remain vigilant,” he added.

Update: On Friday morning, the police said they determined it was a terror attack. 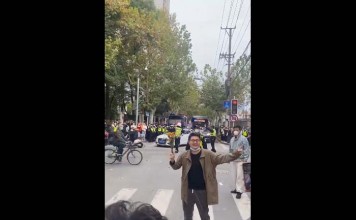