Colin Luther Powell who served as President GW Bush’s Secretary of State from 2001 to 2005 died on Monday of complications of Covid-19. According to his family, he was fully vaccinated and was being treated at Walter Reed National Military Medical Center.

Born in New York City in 1937 to parents who immigrated to the United States from Jamaica and settled in the South Bronx, Powell earned a bachelor’s degree in geology from the City College of New York and received a commission as an Army second lieutenant upon graduation in June 1958. He was a professional soldier for 35 years and rose to the rank of four-star general. His last assignment, from October 1989 to September 1993, was as the chairman of the Joint Chiefs of Staff, the highest military position in the US.


Powell was appointed Secretary of State by President George W. Bush and became entangled in representing to the UN Security Council inaccurate data provided by the administration regarding the presence of Weapons of Mass Destruction in Iraq, which served as justification for the US invasion of Iraq in 2003. Powell resigned after Bush had been reelected in 2004. In 2008 he gave his heartfelt endorsement to Democratic presidential candidate Barack Obama.

Powell is credited with the use of the Pottery Barn rule, “you break it, you own it.” According to Washington Post journalist Bob Woodward, Secretary of State Colin Powell cited the rule in the summer of 2002 when he warned President Bush of the consequences of his planned military action in Iraq:

“You are going to be the proud owner of 25 million people,” Powell told the president. “You will own all their hopes, aspirations, and problems. You’ll own it all.”

On May 2, 2013, Powell received the Truman Peace Prize from the American Friends of Hebrew University, and on that occasion advocated having a mature, no holds barred relationship with the Jewish State. “I reject arguments that say we can’t say anything wrong about Israel,” Powell told 270 dinner guests at the Park Hyatt in Washington, DC. “They’re a democracy, they can take it and we can take it in return. We shouldn’t feel it necessary to agree with Israel on every issue. That’s not what mature friends do with each other.”

As a point of trivia, Powell knew a bissel Yiddish, having worked in a Jewish store in the Bronx as a teenager. 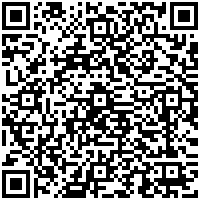