A bipartisan group of the members of the U.S. House of Representatives introduced a bill on Thursday to award a Congressional Gold Medal to the last living prosecutor of the Nuremberg trials.

“From his military service during World War II, to his role as chief prosecutor in a trial that brought 22 Nazi officials to justice, Ben Ferencz has led a remarkable life dedicated to the pursuit of justice,” Frankel said in a news release. “He is a treasure to the Palm Beach County and hero to our global Jewish community, and it is an honor to be introducing a bill to award him the Congressional Gold Medal. It’s my hope that this award reminds us all of the importance of always taking a stand and doing the right thing, and helps us keep the horrors of the Holocaust from fading from our collective memory.”

Ferencz was born in 1920 in Transylvania, in modern-day Hungary. His family fled anti-Semitic persecution and emigrated to the United States, where Ferencz grew up in New York City.

He was awarded a scholarship to attend Harvard Law School in 1940, where he graduated with honors.

In 1943, Ferencz enlisted in the U.S. Army and joined an anti-aircraft artillery battalion that was preparing for the invasion of France. As an enlisted soldier under the command of Gen. George S. Patton, he fought in most of the major European campaigns.

As Nazi atrocities were uncovered, Ferencz was transferred to the army’s newly created War Crimes Bureau to collect evidence of Nazi war crimes. After the war, he was honorably discharged with the rank of Sergeant of Infantry and awarded five medals for his service. He was later appointed as chief prosecutor in the Nuremberg trial that convicted 22 Nazi SS officials for their role in murdering more than 1 million people.

“At a time when national surveys show more and more young Americans know less and less about the Holocaust, as anti-Semitic incidents are on the rise, and as we lose the last generation of firsthand witnesses of the horrors of World War II, I can think of no better individual to receive this honor and no better moment for him to receive it,” Deutch said in the release. “The words ‘never again’ do not simply mean learning the facts of what happened. They require each of us to take action to prevent other atrocities, and Ben Ferencz’s lifetime of remarkable achievement shows his dedication to that work.

“As the last living Nuremberg prosecutor and a man who spent more than 50 years prosecuting the most horrific war crimes, Mr. Ferencz embodies the idea that while the work is not ours to finish, neither is it ours to neglect,” continued Deutch. “His work has left a shining legacy for the next generation, and in honoring him, we commit to continuing his efforts.”

After the trials, Ferencz fought for compensation for victims and survivors of the Holocaust, in addition to the return of stolen assets, among other forms of restitution.

Since the 1970s, he worked to promote the development of international mechanisms to outlaw and punish aggressive war, genocide, war crimes and crimes against humanity.

He continues to be active, giving speeches around the world about the lessons learned during his career.

In the release, Smith said “as part of the effective prosecutorial team at the Nuremberg trials, Benjamin Ferencz helped ensure that those who committed unspeakable heinous crimes in Nazi Germany were held to account. His remarkable work to expose the truth of the Holocaust helped build the foundation on which we continue to fight anti-Semitism in all of its ugly pernicious forms.” 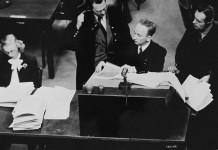 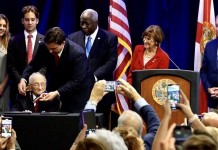