Sarah Prager, the author of two books on the history of the LGBTQ movement who lives in Massachusetts, is a fine gentile woman whose articles have been published in The New York Times, The Atlantic, National Geographic, NBC News, HuffPost, The Advocate, Bustle, JSTOR Daily, Healthline, Fodor’s Travel, Mic, and Business Insider. Her and my beats meet only very rarely, usually when this newspaper reports on the abuse of Jewish homosexuals by people they considered their friends and allies.

On Friday this gifted and very much not-Jewish lady summed up the most recent outcome of Jewish and gentile intermarriages in America in a remarkably honest, personal, and cogent op-ed titled, “Saying Goodbye to Hanukkah.”


Sarah Prager is without a doubt the poster girl (poster woman?) for every traditional Jewish pundit in North America – like yours truly – who has been yelling until they got blue in the face that Jewish intermarriage produces gentiles, by Jewish law and in spirit. And for that matter, even though Jewish law says otherwise, it doesn’t matter if the Jewish parent is the father or the mother. By and large, everyone in these families is sailing away from the Jewish body politic – the way they have done since the first exile from Jerusalem in 597 BCE.

“Growing up, my sister and I ate our Hanukkah latkes next to stockings our mother had cross-stitched with depictions of Santa,” Prager writes, noting that the family “attended a Unitarian Universalist meeting house where it was common to celebrate multiple religions’ holy days.”

“My father’s Jewish tradition only appeared at Hanukkah for the American ‘holiday season,’” she explains. There were no family celebrations of Passover or Rosh Hashanah or any other Jewish holiday. “In contrast, my mom’s Catholic upbringing emerged not only at Christmas but also for Easter, though that was only about eggs, bunnies, and the resurrection of spring, not Jesus.”

“Our Hanukkah celebration always felt a bit forced, with no extended family involved,” reports Sarah, whose father’s religious relatives were left back in Jerusalem. Her father’s American-born parents had a Christmas tree in their home every December.

Over time, she writes, “my family stopped celebrating Hanukkah altogether. Christmas continued to be the most important holiday of the year, and my sense of Jewish heritage diminished.” When she attended her cousins’ bar mitzvahs and weddings, she remained “an outsider sitting through seders and prayers unfamiliar to me.”

I confess that as I read her well written personal story, I felt no pain. For some bizarre reason, the State of Israel, the Jewish Agency, the Jewish federations, continue to invest hundreds of millions in reaching out to mixed couples to somehow “save” them. My personal experience has shown that the only offspring of these marriages who is ever “saved” usually pursue a Jewish conversion to become very religious Jews – but they are few and far between. I know hundreds if not thousands of Israeli and Jewish-American officials depend on this “save the mixed Jew” effort for their livelihood, but other than giving them parnossah I see little value in it.

If you love her, let Sarah Prager go. At least there’s a good chance her daughters won’t grow up to become anti-Semites. 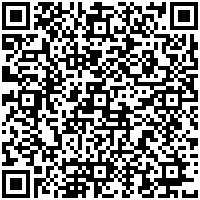