For Jews and their neighbors living in parts of Los Angeles County, San Bernadino County and Kern County, it’s been a very challenging Sabbath.

Barely 48 hours after a 6.4-magnitude earthquake hit the southern California town of Ridgecrest on Thursday a powerful 7.1-magnitude quake struck the area again just before the start of Friday night Sabbath services, at 8:20 pm local time.


Terrified residents streamed outside as buildings swayed, foundations cracked and 4 inch wide cracks raced down the streets right before their eyes.

People in the area reported structure fires due to gas leaks, water main breaks and power and communications outages. Several people were injured as well, but there were no fatalities, according to the Kern County Fire Department. In the town of Trona (pop. 2,000) there had been no power or water since Thursday’s temblor – technicians were in the process of restoring it when Friday’s earthquake hit.

Wires were down and blackouts were reported in a few areas in Los Angeles County, and shaking was felt as far away as Las Vegas and in Mexico.

The epicenter of the new earthquake was located 11 miles northeast of Ridgecrest, according to the U.S. Geological Survey. It was 11 times stronger and five times bigger than the one on Thursday, meteorologists in the United States said.

According to USGS geophysicist John Bellini, more than 4,700 quakes – called “aftershocks” – have hit the area since Thursday. Three new temblors registering at 5.0-magnitude or greater had already struck within the first hour following the Friday night earthquake.

“USGS has issued a red alert for economic losses meaning that extensive damage is probable, and the disaster is likely widespread. Estimated economic losses are at least $1 billion dollars,” the USGS said in a statement on its website. “Past events with this alert level have required a national or international level response.” 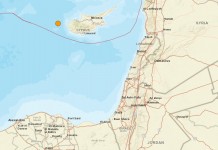 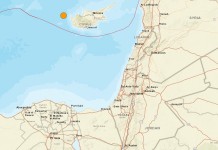 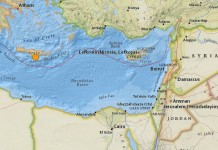 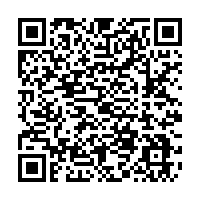